Photo (from left): The Fuller Center’s Ryan Iafigliola, Joel Derksen, Jessica McClain and Connor Ciment are getting ready for the June 1 start of the 2018 Fuller Center Bicycle Adventure.

The Fuller Center for Housing’s international headquarters in Americus, Georgia, has been named one of only 20 Bicycle Friendly Businesses in the state of Georgia — and one of only 1,199 nationwide — by the League of American Bicyclists.

The designation comes during National Bike Month and as cyclists prepare to begin the 2018 Fuller Center Bicycle Adventure‘s summer rides, a pair of paths that will take one group from Astoria, Ore., to Portland, Maine, and the other taking riders from Ocean Beach, Calif., to Ocean City, N.J. The cyclists are raising money for and awareness of The Fuller Center for Housing’s affordable housing ministry — and they’ve already passed the $200,000 fundraising mark this year.

“After 11 years of leading Bike Adventures around the country, cycling has become part of the Fuller Center’s DNA,” said Ryan Iafigliola, The Fuller Center’s Director of International Field Operations and the man who founded the Bicycle Adventure. “There are people around the country who know us as the people who lead great bicycle rides. Out of that grew our local involvement, where some of us bike almost every day to the office, and we’ve been active encouraging cycling and safe cycling. It’s great to receive this formal recognition of all these efforts.”

“As we celebrate National Bike Month and the tenth year of the Bicycle Friendly Business program, the League of American Bicyclists is honored to recognize our latest new and renewing Bicycle Friendly Businesses,” said Amelia Neptune, Director of the Bicycle Friendly America program. “These companies and organizations are making their workplaces and their communities safer, happier, healthier, and more sustainable through bicycling. We applaud these businesses, including The Fuller Center for Housing, for leading the charge in creating a more bicycle-friendly America for everyone.” 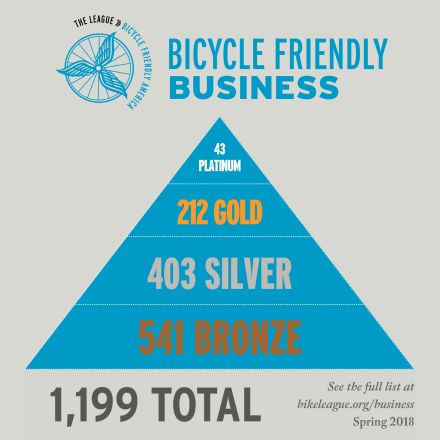