As usual, Fuller Center for Housing Armenia has been bustling with activity all summer long, having hosted seven Fuller Center Global Builders teams in addition to its numerous other partnerships that help put Armenians in simple, decent housing.

And this summer will go down as the summer that Fuller Center Armenia has dedicated its 200th house since becoming a covenant partner in 2008.

“The Fuller Center Armenia is an amazing partner,” Fuller Center President David Snell said. “With the generous support of the American-Armenian community, as well as solid support from organizations within Armenia, this dedicated and hard-working group has provided dece 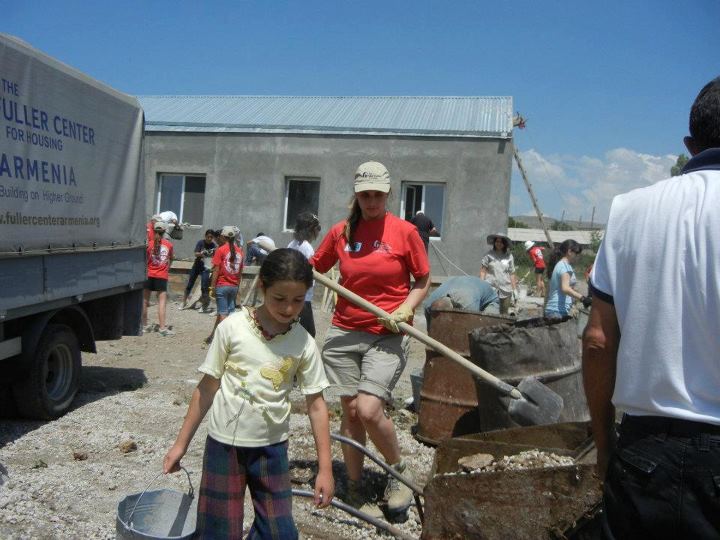 nt homes for 200 families in four short years. They are a blessing to those families and a blessing to The Fuller Center as they lead the way in advancing the work of this great ministry.”

The Fuller Center’s work has long been needed in Armenia, especially after the former Soviet Union state suffered a devastating earthquake in 1988. In the wake of the disaster, metal shipping containers were sent to Armenia to be emergency shelters, but thousands of families have lived in the containers known as “domiks” ever since.

Among those are the Manoukyans, our 200th partner family in Armenia. The family of six from the village of Areni in the Vayots Dzor region had been living in a domik for many years in unbearable conditions without a kitchen or bathroom. They had begun construction of a simple new home but could not finish because of financial difficulties.

That’s when FCH Armenia stepped in. With the help of a 12-member Fuller Center Global Builders team from St. John Armenian Church of Greater Detroit led by Jacqueline ElChemmas, the Manoukyans finally realized their dream of owning a decent home.

“As Armenians in the Diaspora (Armenian communities outside the country), we all have a strong desire to help Armenians in our homeland,” ElChemmas said. “We are fortunate that St. John’s Armenian Church of Greater Detroit has a large community and that we have been able to sponsor each home we’ve worked on.

“We were privileged to work alongside the Manoukyan family to help them further the process of their home and make their day-to-day life easier,” she added. “The team feels that they are their new family. Each member felt a bond with the family, and our ties to Armenia are even stronger. Each home is a labor of love.”

“We look forward to build, build and build and help more and more families,” she said. “We have the capacity to build more than a hundred houses per year. We can do more – with the help of funds, donors and volunteers, both local and international. … The joy of the parents seeing their children in a house instead of a metal container is huge.”

Watch Gohar Palyan discuss the need and our work in Armenia: