Two weeks ago, Fuller Center Director of International Field Operations Ryan Iafigliola set off on a whirlwind tour of FCH operations in El Salvador and Honduras while also exploring potential new covenant partners in another area of El Salvador and in Nicaragua.

He came back with a new partnership in The Fuller Center of Leon, Nicaragua, and a soon-to-be new partner in El Salvador. He also returned with striking photographs of poverty from the Nicaraguan fishing village of Las Penitas where the Fuller Center plans to work. But the first image that pops into Iafigliola’s mind when he reflects upon his visit to Las Penitas is that of smiling children.

“Trips like this are what keep me motivated,” he said. “One family in particular stands out to me, a family with four kids, two of whom were there. Dad’s a fisherman. Their house was nothing but a few boards, a sheet hung up as a door. So they had no security. You just felt bad for this family having to live there.

“But in talking to them, if you didn’t see their house, you wouldn’t have any idea what kind of conditions they live in,” he added. “They’re clean, very polite and kind. They smiled and laughed. Their two kids thought everything I said was the funniest thing they’d ever heard, maybe because I was trying to speak Spanish, the accent or something. These are the kind of people we need to be helping. We need to give these kids a better place to sleep at night.”

While few images can compete with those of happy children, he also was struck by the generosity of the family. It’s something he has witnessed time and time again in his international travels but remains impressive. 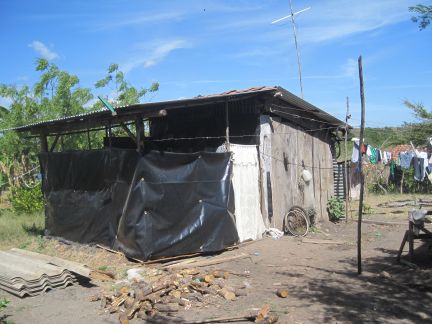 “I find the most generosity often to be among the world’s poorest people,” he said. “They wanted to give us just about every fish they had. The father was emptying out his basket and putting them into a bag and insisting we take it. But that’s just the kind of people they are, giving kinds of people. That’s who we’re trying to help. Those are the people who are gonna repay. That gives them the chance to help someone else. They already have that giving mind-set.”

And, now, they have a Fuller Center for Housing based in Leon, about 12 miles eastward, to help. It’s a relationship that traces back to the beginnings of The Fuller Center for Housing when Danilo Guiterrez Garcia began emailing founder Millard Fuller and exploring the possibility of forming a covenant partner in Nicaragua. Nearly seven years and many email exchanges later, Iafigliola was able to visit the site.

While there, he was able to see how other programs are benefiting Nicaraguans, including one called Habitar (different than Habitat), which helps locals form cooperatives to get their hands on housing funds through banks and the government.

“It’s a really great initiative, but the problem is that to qualify you have to have an income of at least $200 per month,” Iafigliola said. “And the families we’re working with aren’t making anywhere near $200 per month. We’re going down to reach some of the very poorest people in the country that are not able to be helped by many of the other good programs down there.”

Fortunately, The Fuller Center’s covenant partner there will be led by a team with a long history of helping Nicaraguans get into decent housing. With the help of Fuller Center donors and volunteer teams, they aim to do more.

“They’re going to be a really good group for us,” Iafigliola said. “They have a lot of people who are very interested, and they’ve proven their commitment by persisting over time.”

View dozens of photos from from Ryan Iafigliola’s visit to Nicaragua.