The Fuller Center for Housing’s global reach has grown this week with the official addition of Honduras to our list of international covenant partnerships, President David Snell and Director of International Field Operations Ryan Iafigliola have announced.

A team from Georgia Southwestern State University will travel there in March as our first Global Builders work group in Honduras. But they won’t exactly be starting from scratch. Seeds for the Fuller Center’s new Honduras partnership were planted after Hurricane Mitch devastated the Central American nation in 1998.

That’s when Cordele attorney David Forehand and Americus contractor Frank Purvis wanted to get involved in helping the country recover. They formed Heart of Georgia Christians in Action and immediately set to work building homes around the coastal community of La Ceiba. 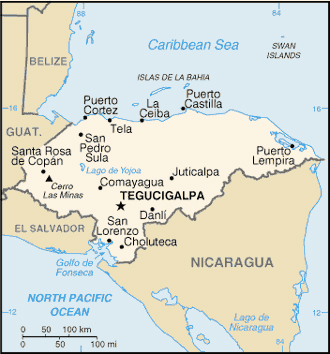 “The model we used was very similar in many ways to what I’ve heard The Fuller Center does in Third World countries,” said Forehand, who recently joined The Fuller Center’s board of directors. “We’d go into small villages and build houses. And every family member who’s a recipient of a house would contribute a family member to work until the project is complete.

“We did several projects over the years, and we got further and further away from just being disaster relief.”

As years passed, members of the Heart of Georgia board began to take up other missions.

“The Heart of Georgia group was a great group of folks who came with Christian motivation and background,” Forehand said. “We didn’t really have any credentials or criteria for folks to get houses. What we tried to do was what I’ve heard referred to as the two-handed gospel: You reach out to people where their need is and by doing that show the loving hand of God.

“What happened over the years is as we got further and further down the road, people in the Heart of Georgia group sort of drifted off to do various things, all of which were good things,” he added. “So eventually we got to the point where my wife and I and another couple of family members were funding the project. So what we did a couple of years ago was contact the people who had been on the board and asked them what they wanted to do. Basically at that point, it was clear that my wife and I wanted to continue, and everybody else had moved off into different areas of energy.”

The Forehands formed a nonprofit corporation called In The House. They weren’t ready to see the work in Honduras slow down. Purvis, who has continued to consult with In The House on occasional issues from afar, says the work hasn’t slowed down as a result of one Christian man’s determination.

“The last few years, it’s pretty much been David on his own – funding it, watching it and supervising it, going down a couple times a year and checking it out,” said Purvis, who has seen that kind of determination in other Christians, including the late Millard Fuller, with whom Purvis struck up a friendship in 1980.

Purvis would even go on to work with Habitat for Humanity, and after leaving there to focus on his own construction business would later build the last house in which The Fuller Center co-founder lived until his unexpected death in 2009. Purvis also helped Fuller start The Fuller Center and helped lay the groundwork for some international projects. When Forehand expressed a desire to grow the mission in Honduras, Purvis knew where to go – to David Snell, the Fuller Center for Housing president and Purvis’ one-time boss during their Habitat days.

Connecting with The Fuller Center

“I thought this was a great opportunity if (The Fuller Center) could expand into Honduras,” Purvis said. “They had an inventory down there and have a structure. I introduced David Forehand to David Snell, and we went down there and visited and looked at the project and came up with a program that would meet The Fuller Center’s needs and David Forehand’s needs and the people in the country’s needs.”

Snell returned a couple months ago from the quick jaunt to Honduras impressed with what he saw. He is thrilled to formally embrace the covenant partner’s operations, which will be based in the coastal city of La Ceiba but not limited to that area. Snell said that the fact Forehand’s mission already has a strong foothold in Honduras and that Forehand has such a passion for service facilitated a natural union.

“We are very excited to announce that Honduras is the latest country to join The Fuller Center for Housing,” Snell said. “We are also excited to be working there with an existing organization that was established by a group of Georgia Christians, including our board member David Forehand and long-time friend Frank Purvis, to respond to the ravages of Hurricane Mitch. They have done good work over the years, and together we will do even more.”

Iafigliola eagerly embraces having a new destination to offer the growing numbers of people interested in Global Builders opportunities and mission trip destinations through The Fuller Center, which shattered records for Global Builders trips and participants this year. There are already 25 Global Builders trips scheduled for 2012, including the Georgia Southwestern group bound for Honduras. The group will work in Santa Elena, near Lago de Yojoa.

“Millard’s dream was to take this concept to every country on earth that has inadequate housing, and now we’re one step closer,” Iafigliola said. “Honduras is a country with a lot of issues and needs but full of people like you and me. I’m excited to do this together with them, and I expect that many of our Global Builders volunteers will be interested in joining, as well.

“We expect this to be another terrific location – not to mention close and inexpensive – for church and school groups for years to come.”

What to expect in Honduras

The boots-on-the-ground leader in Honduras is Eli Urbina, continuing in the same capacity as he did for Heart of Georgia Christians in Action and In The House.

“Eli Urbina has been our project leader and coordinator down there,” Forehand said. “He’s kind of a preacher and more of a church planter than an evangelist. His daddy was a preacher and started a lot of churches in a remote area near La Ceiba. … One of his gifts is reaching out on the spiritual side. It’s been a good fit for us.”

La Ceiba, located on the northern coast, is the fourth largest city in the nation with more than 174,000 residents. It’s considered a tourism mecca because of its thriving nightlife, beach locales and especially because it offers daily ferry service to the Bay Islands, including the main islands of Utila and Roatan. Roatan is a hotspot for scuba divers as it is located near the Mesoamerican Barrier Reef, the largest barrier reef in the Carribean Sea and the second-largest in the world after Australia’s Great Barrier Reef.

“I’ve been scuba diving off Roatan, which is one of the top 10 dive spots in the world,” Purvis said. “You get out on those little islands, especially near Roatan and it is really nice. Got in the water with a whale shark out there. That’s one of those things you don’t forget.”

But it’s the people of Honduras that have kept Purvis and Forehand tied to the mission.

“What I’ve seen is that they are very gracious, very generous, very hospitable, very warm people,” Forehand said. “I’ve never been down there and felt anything less than completely welcomed. They really want you to feel at home, inviting you to their houses and wanting you to eat with them.”

Purvis echoed Forehand’s sentiments about the people – but with the eye of someone who has supervised many a work site.

“If you look at the way Honduras has responded to that catastrophe, they obviously have a strong work ethic,” he said. “They’ve been able to do fantastic things since the first time I went down there, about a month after Mitch hit.”