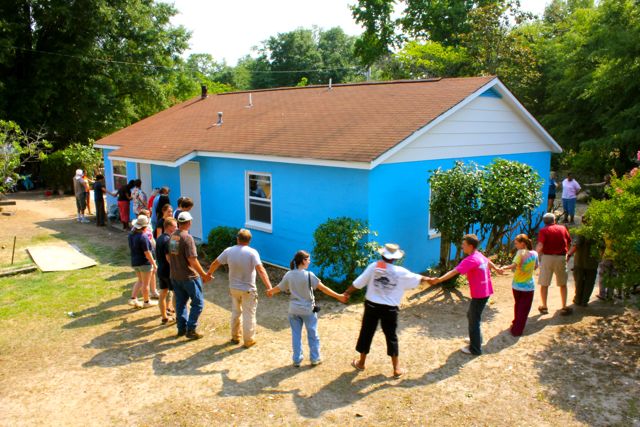 After a week of painting, scraping and sawing Ted Bateman and Mamie Prater’s house in the Koinonia Community, volunteers from The Fuller Center for Housing joined hands with the homeowners and sang, "May the Circle Be Unbroken."

The song was part of the house dedication that took place that evening, in which The Fuller Center presented the family with a bible and keys to their refurbished home.

“It’s a greater blessing to give than to receive,” Kirk Lyman-Barner, director of covenant partner development for The Fuller Center for Housing, said as he handed the Bateman and Prater a small wooden box filled with envelopes.

“Inside this box are enough envelopes to pay off the cost of the repairs. We’ll take those payments and help the next family in need, and you will be participating in the Greater Blessing,” Lyman-Barner told them.

Prater said she has been living in the home for 30 years. Her son, Bateman, is part of the maintenance team at Koinonia. 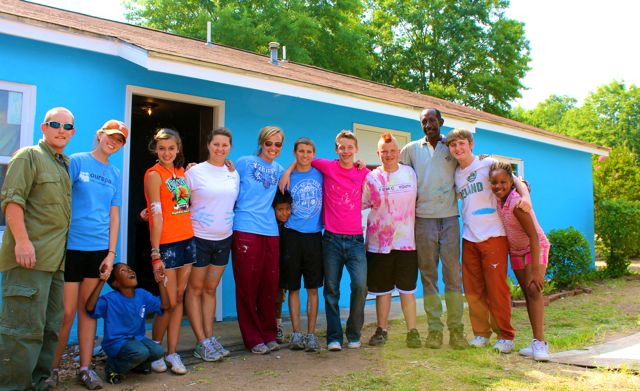 "I do this kind of work but they wouldn’t let me do anything," Bateman said. "They kept telling me to sit down because I’ve worked enough, because I help the older people in the neighborhood. I feel like they gave back to me what I’ve been giving all the while."

Volunteers said they felt privileged to work with the hard-working homeowners.

“Mr. Ted does so much for others. It was nice to give back to someone like that,” Conrad Langston said.

Langston was part of a group of 15 teenagers from the First United Methodist Church of Bossier City, La., that helped repair Bateman and Prater’s home on a mission trip.

The group painted the exterior of the home, and put in new windows and doors so it will be cooler in the summer and warmer in the winter.

“It’s awesome to see what a group of people can do in such a short time together,” Amy Keel, another volunteer from the group, said.

Thanks to the hard work of the students from Bossier City, the home repairs were completed on schedule.

“They have a great work ethic. They all went the extra mile and got things accomplished,” Dave Landis, a local contractor who supervised at the work site this week, said.

Bateman said the experience of working with the volunteers has given him a renewed inspiration to continue helping his community in the future.

“I’m proud of them – Every one of them,” he said. “I want to keep building and giving people the love they’ve shown to me.”