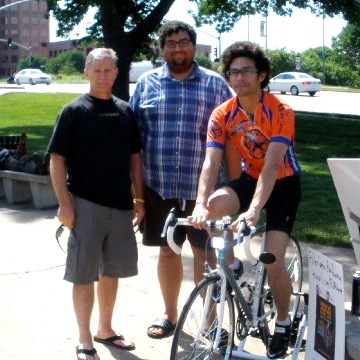 KANSAS CITY, MO – – When a cyclist signs up for the Fuller Center Bicycle Adventure (FCBA), they are given fundraising suggestions, one of which is to ride a stationary bike outside a business to attract attention, support and donations. Ivan Cunningham, 27, decided this idea was just crazy enough for him. He set out last week to ride 25 hours in place toward his goal of raising $5,000 for the Fuller Center’s work in Haiti.

Ivan rode the first ten days of the 2009 FCBA, decided it wasn’t enough, and is back this year to pedal the full route. He chose to ride 25 hours on a donated stationary trainer to symbolize the significance of the Fuller Center Bicycle Adventure and this year’s 2,500-mile route.

He started at the Power and Light District of Kansas City at 11 p.m. on June 3, moved to the Country Club Plaza the following morning and finished at the Crossroads District on Friday. He took a 10-minute break in the middle of each segment and about 30 minutes to move from one location to another. Ivan’s roommate joined him to help pass out brochures and talk about the trip.

"The ride had its ups and downs," Ivan said a few days later. "I attracted a good bit of attention and got some donations."

Two local news stations covered Ivan’s ride, and several people told him the following day they had seen him on TV.

"I didn’t quite make it to 25 hours," he said. "It was in the 90s during the day on Friday, and it turns out I didn’t drink enough water. I stopped around 10 p.m. Friday night after spending the last hour trying not to be sick or fall off the bike."

Ivan deserves a huge "Oyee!" for his pre-ride ride.
You can visit his personal fundraising page here to support his efforts. 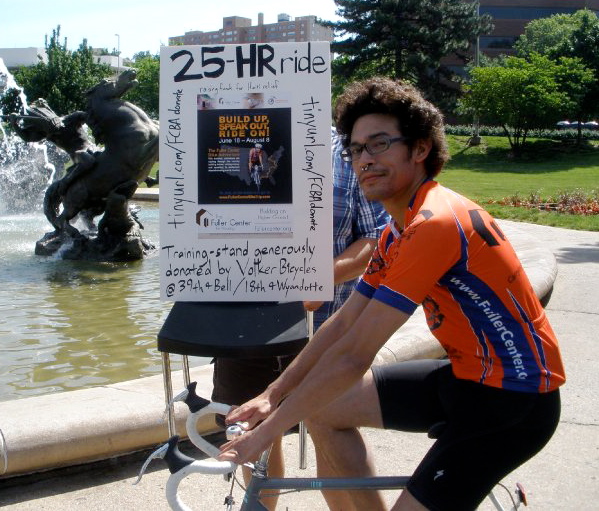 Go back to the Bicycle Adventure blog