Most people do not equate building walls with opening doors, but that’s exactly what CrossRoads Missions’ Help Build Hope program does.

More than 85 Fuller Center for Housing new home builds have been supported by CrossRoads Missions’ Help Build Hope, which gifts walls, materials and financial resources to partnering organizations. A nonprofit, CrossRoads does this not just to support the affordable housing movement but also to help churches put faith into action.

“Help Build Hope is a program we created to kind of 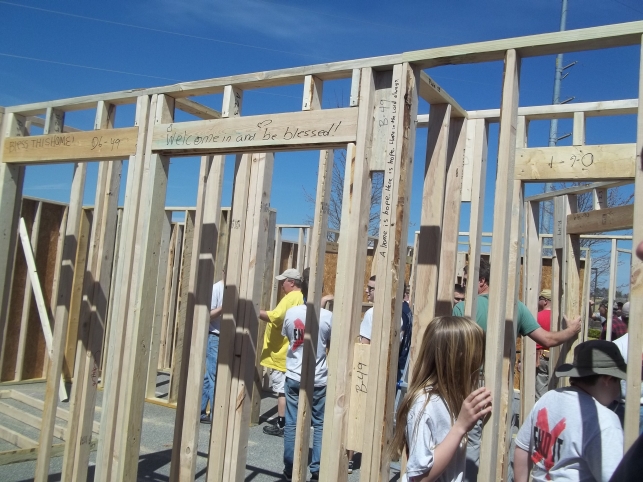 “The idea behind it is if we can get people to see that their contributions in working together as the body of Christ makes a difference, then hopefully it will move them out of the parking lot, into the local community and eventually nationally and internationally,” he added.

Chattahoochee Fuller Center Project Executive Director Kim Roberts said her covenant partner has been blessed by support from CrossRoads and inspired by the messages and Bible verses that often adorn the walls CFCP and other covenant partners have received. But her perspective was enhanced this past Saturday as she saw about 150 youth and adults come together in the parking lot of First Baptist Church in Newnan, Ga., to assemble walls for her group’s 30th home going up this year in Lanett, Ala., birthplace of Fuller Center and Habitat for Humanity founder Millard Fuller.

“They would gather their wood and build their wall,” said Roberts, who came with a rental truck to transport the walls back to Lanett. “And as they finished the wall, they would gather in a circle and pray over the wall. … It took maybe three to four hours for them to build the walls for the house. Once they got finished, they actually put the house together in the parking lot. They stood the house up, and we walked through the house.”

involved in service in a very short amount of time,” Minton said. “And there’s a big finale. At the beginning of the day, there’s just a bunch of lumber sitting in a pile; and at the end of the day, there’s a house standing there in the parking lot. They get to write words of encouragement and scripture (on the walls) and send messages to the family. It’s a real mobilizer. It’s something that people can get excited about.”

Count Roberts among those who are excited – and not just because the gifts of these walls will reduce the cost of building their 30th home in Lanett.

“I want to do this here in our area, involving our youth,” she said. “It was just wonderful.”

Brenda Barton, communications liaison for The Fuller Center’s U.S. Field Operations, sings the praises of CrossRoads’ support. Since The Fuller Center’s earliest days, she has seen how their support makes construction not only more economical but also makes home ownership even more affordable for the families with which The Fuller Center partners. 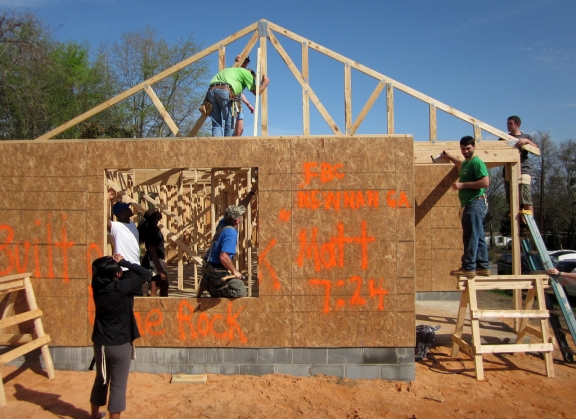 “CrossRoads Missions has been a partner with Fuller Center since the early beginnings when we started building for Hurricane Katrina evacuees back in 2005,” Barton recalled. “It is with their partnership that we have been able to help build more than 85 new homes in various Fuller Center covenant partner communities throughout the U.S. With the help of Help Build Hope Partner Coordinator Dave Lockwood and others at CrossRoads through their Help Build Hope program, we have been able to keep down the cost of new homes for low-income families.”

CrossRoads Missions is marking its 20th anniversary this year – not bad for an organization founded by someone who went to Milligan College in east Tennessee with other plans.

“When we were at Milligan College, we just decided that we were going to start taking students to do short-term mission work, primarily in Mexico at the time,” he said of the work done by him and his sister, Judy. “By the time we graduated, we had taken over 300 students to do that. The school was interested in how they were going to be able to keep doing that.”

They decided that the best way to keep the work going was to encourage Minton to keep leading it.

“I went to get a degree in accounting and computer science, and (mission work) wasn’t really what I’d gone to school for,” he recalls. “So we talked about it, and they offered to put us in office space and that kind of stuff. We prayed about it and, sure enough, God opened all those doors, and that’s kinda how it started. Now, here we are 20 years later, and we get the opportunity to work with 10,000 to 15,000 people a year in some form of short-term mission or another.”

And for more than seven years, Fuller Center volunteers have raised walls provided by Help Build Hope and have seen the many inspirational inscriptions upon them, penned by people CrossRoads has successfully helped move from pews to participation.

“One of the many special benefits we receive when we partner with the churches associated with CrossRoads is that we receive more than building materials,” said Kirk Lyman-Barner, The Fuller Center’s Director of U.S. Field Operations. “The walls always seem to arrive with Bible verses, words of encouragement and prayers. This is worship that leaves the stained glass sanctuaries and becomes a tangible example of an answer to the line in the The Lord’s Prayer that says, ‘Thy Kingdom come on Earth as it is in Heaven.’”