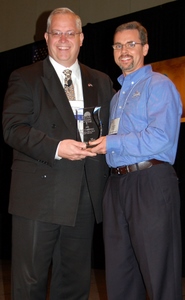 A member of the Fuller Center Board of Directors, Jeff Cardwell, was just recognized for retail innovation in the home improvement industry by the North American Retail Hardware Association. Cardwell was named Overall Retail Innovator of the Year. The award acknowledges his work as president and CEO of Cardwell Do-it Best Home & Garden in Indianapolis.

The award is given based on outstanding achievement as owners and managers of independently-owned hardware and building supply stores in the United States and Canada.

Changing the World by Changing Yourself

For Jeff Cardwell, president and CEO of Cardwell Do-it Best Home & Garden in Indianapolis, retailing is more than inventory turnovers and financial statements. It’s a means to express his Christian faith and put into daily practice one of Mahatma Gandhi’s most profound directives: “Be the change you want to see in the world.

Cardwell is a natural business leader. His 30 years of experience in hardware retailing complements an impressive real estate development career. His commercial ventures, community service initiatives, humanitarian work locally and around the world, and awards are numerous.

Born in Morgantown, Ky., Cardwell grew up in Indianapolis. After high school, he began work at 16 as a general laborer unloading lumber at Associated Materials, Inc. (AMI). Becoming its youngest manager ever at 18, he remained with the company but also launched out on his own in the 1980s and 1990s, developing residential and commercial real estate and earning various accolades for his work, including “Builder of the Month” (Builder/Architect Magazine, October 1994) and “Builder of the Year” (Habitat for Humanity of Greater Indianapolis, 1994).

Do it Best now has 4,100 member stores in all 50 states and 45 countries worldwide, with more than $3 billion in annual sales. It remains the only full-line, full-service buying cooperative in the hardware, lumber and building materials industry.

Today, Cardwell Do it Best Home & Garden features hardware, building and gardening supplies, and a complete tool rental center. The store’s Web site gives the public access to more than 67,000 other products.

Possibly the most innovative aspect of Cardwell’s store is a branding that goes far beyond a logo or an ad jingle. In Indianapolis and elsewhere, the Cardwell name is inextricably linked to community service.

Both inside and outside the store, Cardwell and his employees live their creed “to build better neighborhoods in which to live, work and raise families, and to serve and help the community grow with a servant’s heart.”

From product selection and promotion to customer service, the goal is to serve others. “Being a business owner gives me and my family the opportunity to lead by example,” Cardwell explains. “We not only work with our vendors and employees, we work with our customers – to step up and make things happen. We partner with many organizations to help meet their needs and our community’s needs.”

Cardwell has been meeting the needs of others for years.

In June 2000, Cardwell went on his first mission trip, traveling to El Salvador. During that trip, the idea for creating “World In Need” (WIN), a not-for-profit charitable organization, was born. He and four others established WIN on Dec. 19, 2000; three weeks later, on Jan. 13, 2001, a devastating earthquake hit El Salvador, killing several thousand people and leaving more than 1 million homeless. In less than 90 days, WIN provided more than $2 million in emergency relief supplies to the earthquake victims.

In September 2005, Cardwell led a first-response team of volunteers to assist the survivors of Hurricane Katrina, delivering more than 2 million pounds of donated relief items within the first 60 days after the storm.

In October 2006, Cardwell traveled to Pattaya, Thailand, for the “Third Global Summit on Peace through Tourism.” With more than 60 nations represented, he presented his views on “Traveling with a Purpose” and the new concept of worldwide “Voluntourism.”

In 2007, Cardwell was elected to Indianapolis’ City-County Council, where he chairs its Economic Development Committee. He is a precinct committeeman and ward chairman in his voting district. He also is president of the Indianapolis Metropolitan Police Motorcycle Drill Team, Honorary Consul to the Republic of El Salvador, international board member of the Fuller Center for Housing, vice president of the board of directors of The Friends of Garfield Park and president of the Gateway Community Alliance, a not-for-profit economic community development organization.

To all of his titles, Cardwell can add husband and father. He resides in Indianapolis with his wife, Cheryl, and has three children.

At his store, Cardwell’s primary focus is on being a good corporate neighbor. “We’ve become known as the ‘community action center’ within our neighborhood,” he says. “That’s very important to us. People count on us to assist with community events, and they think of us first in times of need. They know we can make things happen.”

When it comes to his legacy, Cardwell is passionate.

“The best way to predict the future is to create it,” he notes. “Everyone has the ability to reshape the present and thus create the future. But having that ability is not enough. Using it to make positive changes and help as many people as we can along the way makes it a win-win situation for everyone. It’s the best legacy we can leave.”

Cardwell believes that retailers understand their unique role in society. “We deal with manufacturers, and we deal with the public. We are a needed link and conduit. The retailing industry constitutes two-thirds of the American economy. All parties should walk away knowing that they were treated fairly and were respected, valued and appreciated. That’s the best way to interact with anyone, whether you’re at work as a retailer or at home with your wife and children.”

“Do it best” is more than a store name for Cardwell; it’s a governing principle. “We need to do our best in every situation,” he says. “Your best may be better than mine, but you and I both have succeeded if we put forth the best effort we can in whatever we do. As we mature, our idea of ‘best’ continues to mature. People become more important than profit, and that is how it should be. ‘People helping people’ is the key to success in both retailing and life.”