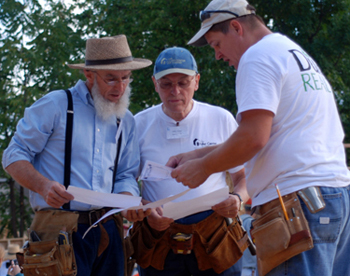 Where fallen-down, condemned homes once lined the poverty-stricken Fountain Square neighborhood of Indianapolis, 22 homes have been made simple and decent with help from hundreds of volunteers, including Mennonites and Amish.
From left, Orie Lehman, LeRoy Troyer and another volunteer analyze floor plans for their work at the Millard Fuller Legacy Build.

The volunteers were in Indiana for the Millard Fuller Legacy Build, which honored Millard Fuller, who died in 2009. Together with his wife, Linda, he founded Habitat for Humanity and the Fuller Center, Christian housing organizations in Americus, Ga.

“From the earliest days of his ministry, Millard Fuller recognized the value of partnering with Mennonites,” said David Snell, president of Fuller Center. “The spirit of servanthood and the generosity that are so much a part of the faith align closely with the foundational principles Millard was inspired with.”

Edgar Stoesz of Akron, Pa., joined the Fuller Center’s advisory council after years of involvement with Habitat for Humanity.

“I had served as the overseas secretary with MCC, and Millard was anxious to internationalize Habitat for Humanity,” Stoesz said. “His need and my availa- bility came together at a good time.”

Fuller Center is largely volunteer-driven and has attracted Mennonites since its inception in 2005, including a few who visited Indiana in September — Stoesz, LeRoy Troyer of South Bend, Ind., Allon Lefever of Harrisonburg, Va., and Howard Brenneman of Lenexa, Kan.. They all hold leadership roles with the organization.

Troyer, an architect, chairs the Fuller Center’s international board of directors. He brought along to Indianapolis friends from an Old Order Amish settlement in Lagrange-Elkhart, Ind. 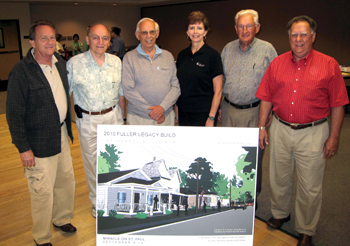 Together they built a home for a couple from Indianapolis, altering the house plans as they went to ensure that it was wheelchair accessible.

Lefever, also a board member, was on a crew that built a house last week with construction leader Merle Graber, a Mennonite from Peoria, Ariz. Lefever taught business at Goshen College, ran a master of business administration program at Eastern Mennonite University and chairs the Mennonite Economic Development Associates board.

“As a Christian businessperson, I like to look for ways we can make this a better world,” Lefever said. “This is a very tangible way corporations can be socially responsible.”

He also likes the “sweat equity” approach, which requires homeowners to work on their home or another Fuller Center project.

“Helping others help themselves? There’s dignity left in that process,” Lefever said.

Greater Blessing projects, 14 of which were completed this month, include minor repairs such as roof work, wheelchair ramp additions or widening a doorframe, which each cost around $5,000. The Fuller Center holds a written agreement with homeowners to donate the cost of materials back to future repair projects as they are able.