Clarksville sits in far north Tennessee on the border with Kentucky, near the U.S. Army post of Fort Campbell — home of the 101st Airborne Division, 5th Special Forces Group and the 160th Special Operations Aviation Regiment. With Fort Campbell being home to more than 30,000 soldiers, fifth-most in the Army, Fuller Center Clarksville President Sherma Johnson hopes to develop a strong relationship with the post and the tens of thousands of military family members and veterans in the area. 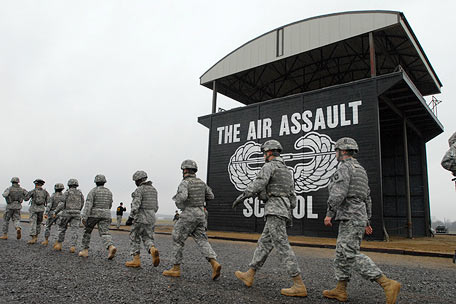 Fuller Center Director of U.S. Field Operations Kirk Lyman-Barner said the Fort Campbell connection is timely as The Fuller Center will embark upon an effort to help veterans with housing repairs and with the Combined Federal Campaign starting Sept. 1 in which federal employees (including service personnel) are encouraged to select qualifying nonprofits to receive donations automatically deducted from their paychecks. The Fuller Center (CFC No. 32458) joined the campaign last year.

“With Fort Campbell nearby, in the coming months we’ll be offering our newest team training on how to qualify veterans for home repair grants,” Lyman-Barner said. “I expect this will create a lot of early good will in the region for our newest team and boost their efforts to help others in the community, as well.”

Of course, the Army will not be Johnson’s only ally in the Clarksville area. In applying to become a Fuller Center covenant partner, she was clear that opportunities for collaborative relationships with churches, schools and other groups abound in the community of more than 132,000 people, making it Tennessee’s fifth-largest city and the ninth-fastest-growing city in America. For the member of Ninth and Main Street Church of Christ, The Fuller Center’s connections as a servant of the church were especially important.

“It’s not the only reason, but I feel that if we’re seeking to help those who are lost, point-blank, whatever it is they need, we first have to seek Jesus,” she said. “That’s my background and my feeling. The church is the foundation, and Jesus Christ is our rock. I just felt that if we’re doing something for the right purpose and the right reasons, joining it shouldn’t be a problem. Being that it is faith-based with a church background is one of the reasons I said yes.”

She also has experience as a volunteer with Habitat for Humanity, another group founded by Fuller Center founders Millard and Linda Fuller.

“I have been volunteering for Habitat for Humanity and had been doing some research myself on trying to expand what Habitat for Humanity does but making a little bit easier for the community or for the people who are wanting a home or rehabbing a home,” she said. “I started doing some research about six or seven months ago, trying to find out if there are any organizations doing similar to what my thought process was. I came across The Fuller Center’s website and said this is the same kind of thing I’m trying to develop here in Clarksville.”

Click here to learn how to start a covenant partner in your area.

You don’t have to have a covenant partner to make a difference. Find out how your church can work with us in our Christian housing ministry.