Our journey from Oakley to Hill City, KS on Saturday was a bittersweet experience for me because I 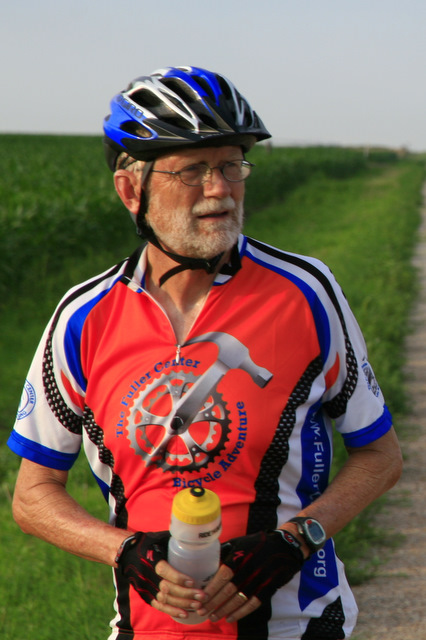 knew that it would be my last day of riding with the group.  My expected feelings of elation, in anticipation of successfully completing the 400-mile segment from Denver to Hill City, were gradually replaced by the realization that I would no longer be physically a part of the ride, come the end of the day.  I was suddenly struck by the extent to which these riders, both young and old, had “gotten to me” and embraced my presence during my brief one-week stay with the group.

Applying Allen’s sunrise devotional message of “living in the moment,” my feelings of nostalgia subsided as I started to focus on the task at hand—ride safely to Hill City for each of the next 76 miles in support of the Fuller Center for Housing!

It was a very interesting day of riding and fellowship for me.  It was quite beautiful and exhilarating riding north out of Hill City at sunrise.  Several of us stopped along the early route to take photos of the sun rising over the waving fields of corn.  I was also surprised to see how green it was, considering how hot and dry it had been on the preceding days.  For some strange reason it took me about 30 miles to find the “sweet spot” on my saddle.  This had been a challenge for me on the first couple of days but I thought it had been resolved.  Getting off the bike for a few minutes between official rest stops caused the problem to remedy itself.  From that point on I felt great!

With some 25 miles to go, Tom and I spotted a group of young riders (Alyssa, Sarah, Anne, and Allen) slowing down in the distance.  (They must have been slowing down because it would have been the only way we could be gaining on them!)  Although Tom had warned me never to chase down the fast young riders, I was feeling pretty good and couldn’t resist, and knew that I only had to make it to Hill City rather than all the way to Washington, D.C.  Anyway, we caught up with the group and actually eased ahead a bit for a couple of miles until my rear derailleur cable snapped and my 30-speed bike instantaneously became a 3-speed!  Having lost my lowest gears, the last 20 miles were a challenge for me and I quickly came to appreciate why Hill City is called Hill City!  But I need to add that the rolling hills leading into Hill City provided a picturesque ending to my cycling adventure.

Shortly after my arrival at Hill City United Methodist Church just before noon, Judy (my wife) arrived to bring me back home to Broomfield, just a few miles north of Denver.  Judy met my fellow riders, and following a hot dog and cookie lunch, we headed for Starbuck’s in Colby before safely returning home.

And now, for what it’s worth, the following are a few closing learnings and observations on what for me was an amazing experience.  First of all, I’m very grateful to “Geezer” Tom, my dear friend and neighbor, who urged me to participate in the Bike Adventure.  Initially, I saw it as a test of my ability to ride a multi-day event that averaged around 80 miles per day.  However, I have to admit that the ride quickly transformed into concern for those people throughout the world who do not have adequate housing and the goal of the Fuller Center of eliminating poverty housing.  This transformation came largely from the attitudes of the other riders, some of whom had previous involvement with Fuller building and restoration projects.  In fact, it became clear to me that it was the cause that was motivating the team rather than the physical challenge of the ride itself.

I was impressed by how graciously we were received by the churches that hosted us along our route and by the townsfolk we encountered.  In spite of what we learn in the news in these rather contentious times, most people really do seem to care about each other in our country.  This gives me a sense of hope that a feeling of community still exists.

Although I was getting slightly more proficient at sleeping on church floors as the week went on, I don’t think I could ever get totally used to it!

I’m amazed how 30 people could successfully negotiate just a couple of bathrooms and be ready to hit the road at 5:30 a.m.!

I now realize that before I do any more multi-day cycling events, I must devise some way of insuring that my backside and my saddle become engaged in a more harmonious relationship!  Backside pain was the only significant affliction that impacted me on the bike.

I also discovered that if I’m hungry enough, I can really enjoy any kind of food that is put in front of me.  My mother would be proud!

And finally, I’m inspired by my fellow riders to become a more “other-centered” type of person.  And although I recognize that the younger riders, especially, are concerned about their futures, with the strong faith that they possess, I’m confident that they will be able to attain their goals.  In fact, when the young people that I rode with assume leadership positions down the road, we will all be in good hands, and the the future will be filled with hope!