(Photo: Armand and Georgette have moved out of a slum and now live in this new Fuller Center house with their two children in Ambohimanambola, Madagascar.)

Thanks to a popular DreamWorks animated movie series, most people think of talking hippos, smart-aleck penguins and dancing lions when they think of “Madagascar.” It is indeed a wild treasure with 90 percent of its wildlife species found nowhere else on the planet.

But there is another significant percentage that is more troubling for Madagascar — 70 percent living below the poverty rate. More than seven in 10 people on the island live on less than one dollar a day. This explains the prevalence of shacks and slums across the African nation.

The Fuller Center for Housing’s new covenant partner on the ground there is working to change that, one house at a time. They began by making badly needed repairs to deteriorating homes and have now dedicated their first two new homes. 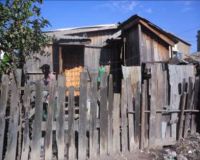 Armand, 57, and his wife Georgette, 51, have raised their children in slum conditions (pictured) despite having steady jobs — Armand being a security guard and Georgette an elementary school teacher. With their combined $100 a month in salaries, they could not afford to escape the slum until The Fuller Center came along.

“With our low monthly income, the bank wouldn’t accept our  request for financing to build our house,” Armand said. “For this reason, we should have lived many years in the slum.”

Then he attended a local meeting as The Fuller Center for Housing of Madagascar was getting started.

“After that meeting, hope to see my house build grew stronger within me,” he said. “The kindness that The Fuller Center team showed to us changed our disappointment to confidence. Now, my house is in a nice place, and my family is leaving the unsafe and unhealthy quarters.”

“I always dreamed of getting a house, but we had no means to achieve it until we met The Fuller Center of Madagascar,” Georgette added. “Now, I am very happy and want to say thank you to everyone.”

Their son Arnaud, 19, is glad that he will be able to finish his studies in a simple, decent home and that his parents will have a healthier life.

“There was no space at our wooden house,” he said. “The dirty water from the toilets of surrounding houses and garbage from the nearby channel came into our home when it rained. But no more, thanks to the donors who helped us build our home.”

Emilienne, 64, is an elementary school teacher who was unable to bear children, so she adopted two sons — Eddy, now 20, and Jessy, 12. Even after working hard for 30 years as a teacher, Emilienne was unable to purchase a decent home for her boys, so she rented a one-room, 172-square-foot apartment for the three of them. 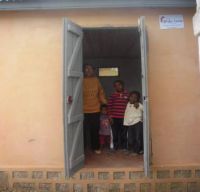 “Now, my long-time dream to have a new house has become a reality,” said Emilienne (pictured with Jessy and two visiting nieces on the day she moved into her home in Ankadilalampotsy-Ankaraobato). “My children and me, we are happy and give thanks to The Fuller Center for Housing and its team. We are satisfied with the partnership and pray that the project will continue in our country. I see this as a great hope for the generation.”

Fuller Center Director of International Field Operations Ryan Iafigliola has been impressed with how swiftly and independently the local group in Madagascar has begun its work, giving him great optimism for the future of The Fuller Center’s work in the country.

“We’re so excited to be working with such a fine group of people in Madagascar,” Iafigliola said. “They may be a small Fuller Center now, but their dedication and abilities make them one to watch. I can’t wait to see what God does with and through us in Madagascar.”

Your gifts make this work possible!