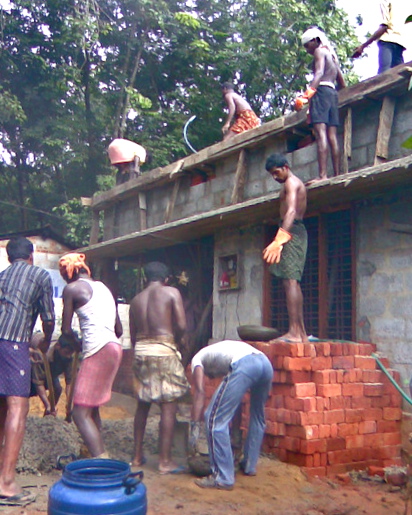 The first Fuller Center home in India was dedicated Oct. 6, 2009 for a carpenter named T. Joy and his family. Prior to the dedication, Joy lived with his wife, two children and his parents in a small, one-bedroom home that had an asbestos roof, a potential health hazard. Joy had hoped to receive a loan in order to reconstruct the home.

"He was not successful because of the cumbersome procedure involved and the exorbitant interest charged," T.H. Lawrence, chairman of the Trivandrum FCH in India, said. "He had almost given up his hope."

Joy applied to partner with the Trivandrum FCH to pay for a home to be built through an interest-free loan, and his family was chosen by the board. The home was built during the week of the Millard Fuller Legacy Build, Aug. 30-Sept. 5, 2009. During the ceremony, the Joy family received a Bible as well as a portrait of Millard and Linda Fuller, co-founders of The Fuller Center for Housing.

"Though we had not embarked on any building project, the board of the Trivandrum Fuller Center decided to seize the opportunity and participate in the global build as a token of the utmost respect for the late Millard Fuller," Lawrence said.

The Joy family was able to help build the home during that week, providing sweat equity.  "The family is now excited and and proud of having a new and decent house to live in, while we are thrilled to see the first Fuller Center house having taken shape in India under the aegis of the Trivandrum FCH," Lawrence said.

The board was able to raise the funds needed for this home on their own and hope to keep fundraising in the future.  "I believe that most of us are humane in nature, but are skeptical about whether what they donate will be properly and fully utilized by those involved in the process," Lawrence said. "My concern is to make sure that this fear is dispelled from the minds of donors by all means and to show them that We Can Do It!"