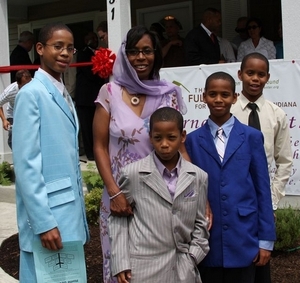 A single mother received the keys to her new Pike Township home Sunday, and the group that made it possible is promising to help more Central Indiana families.

The house in the 7700 block of North Pershing Road was the first in the area built by volunteers with The Fuller Center for Housing, a Christian-based nonprofit. The 1,400-square-foot, four-bedroom home was built in nine weeks with the help of more than 100 volunteers, mostly from local churches.

Homeowner Elizabeth Hines fought back tears during Sunday’s housewarming ceremony, admitting afterward that she feared she would never be able to own her own home while raising four sons on her kindergarten teacher’s salary from a private school.

For the rest of the article, visit its original location, “Family’s home is group’s 1st in Indy.”