The Fuller Center for Housing’s Greater Atlanta covenant partner is leading a project to renovate Fire Station No. 9 on 3501 NW Martin Luther King Drive in the Adamsville community this Saturday. 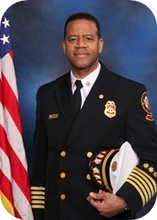 Greater Atlanta director Mark Galey is using the project as a way to thank first responders, but he also sees it as a springboard to generate interest in this year’s Sept. 11 Memorial Build.

Greater Atlanta’s Sept. 11 Memorial Build will take place on County Line Road at a home donated by Chase Bank, Galey said in a phone interview Wednesday afternoon. The home will go to a first responder in need. Galey said the plan calls for the Atlanta fire department to look within its ranks for a good recipient.

"We had a really good meeting," Galey said of the final planning for Saturday’s fire station project. "And we’ve gotten confirmation that the Atlanta Fire Chief (Kelvin J. Cochran) will be there. And he will be in his work clothes, not in his suit. He’s coming to work."

Also coming to work is Kimberly Lacy, star of HGTV’s "Curb Appeal: The Block." Earlier this year, the effervescent star chose to become an ambassador for the Fuller Center for Housing, much to the delight of the organization. Lacy not only brings celebrity

status and recognition, but she also brings expertise and the eagerness to work on such projects.

Saturday’s fire station project will include installation of cabinets and steel countertops in the kitchen area and gear lockers — all with re-used or repurposed materials. Lacy will lead an aesthetic face-lift of the station’s exterior, an area in which the star’s expertise is second to none. Aaron’s has stepped up to donate furniture for the station.

Work begins at 8 a.m., and Galey expects at least a couple more well-known names to be at the site.

Also Saturday, Greater Atlanta has about 400 lawyers working on a home in the Lakewood Heights area in conjunction with Hands On Atlanta. Galey said Hands On has provided a team of volunteers and tools for the project. He also added that covenant partners should take a look at working with Hands On organizations on other projects in the future.