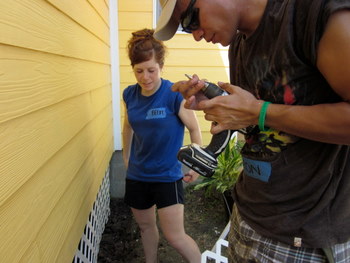 I woke up today a little late. Well, later than I wanted to. I usually wake up to people rummaging in the room, but since we are actually staying here in the Mennonite Disaster Service volunteer housing for more than one night, no packing and noise was made and hence I slept in a little. Maybe going to sleep early would help but I just couldn’t fall asleep that easily. Maybe because I was anxious to start the next day… our final build day. I was awoken though, to pancakes and bacon prepared by Miss Susan. There is nothing like a good hot meal to start the day. Mmmm.

We then packed upthe van and headed to Mama Black’s house in Belle Chasse—just outside of New Orleans. She was displaced by Hurricane Katrina in 2005. She was living in a mobile home just across the street from her new Fuller Center home. 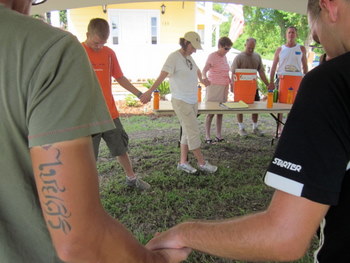 It must have been tough to see a house you lived in for so many years stuck in a damaged state. The project had such an impact on Mama Black’s family that it gave way to Beverly, her daughter, joining The Fuller Center staff.

The house was pretty much 98 percent complete. The team was divided up into doing landscaping, adding siding to the shed, and finishing trim work in the house. I was given the task of adding a skirt/lattice to the foundation of the house. Our team ran into a little hiccup after lunch because we ran out of material to finish. So we took a little break to hit up a snowball stand. I never had a snowball before but I am now a fan. I got a white chocolate macadamia snowball filled with vanilla ice cream and with sweetened condensed milk on top. MMmmm. So good.

After we got back, we completed the lattice/skirt work and changed our clothes for the dedication for the home of Mama Black. We had a ton of guest speakers like the President of the Fuller Center, David Snell and even the lovely Linda Fuller who had the honor of giving the keys to Mama Black. I took the liberty of trying to catch the moment of her entering on camera but unfortunately I didn’t get many good pictures. (I didn’t want to use flash and blind her.) But she was absolutely grinning ear to ear and made a beeline right to the kitchen. Mama Black has a penchant for cooking and she even cooked some food for after the dedication ceremony. The food was delicious and they had everything from crabs and roasted pig to BBQ chicken and bread pudding.

This was the first house dedication I have seen for the Fuller Center. During the other projects we helped with on this trip, we were always at some random stage of the remodel. But in a way, ending at this site was quite fitting because we worked on the first day of a Fuller Center Covenant partner project in Aurora, Ohio. With the large turnout, it was not hard to see that Mama Black was blessed in more ways than one. Not only was she touched for all we had done, but we were touched as well. A BIG thanks to Tamara Danel and the Northshore Fuller Center for including us in your project and dedication ceremony.

Fifty Days? Has it really been that long since we started this Bike Adventure? Seems like we started at Niagara Falls just the other day! This experience was truly touching to me. I was able to better understand the Fuller Center and what they do. As Brother Fredo once said, it’s not often that you can see the change firsthand, but during the Bike Adventure, we got to speak with people, donate to the Fuller Center, and see the change we made almost instantly. Another thing that was great about this trip is meeting all the people, from our host churches to my fellow riders. We all have the same vision of seeing an end to poverty housing.

There are so many people I would love to give special thanks to, but I wouldn’t know where to start and would hate to forget anyone. But I just wanted to let everyone know I appreciated the hospitality of the churches and the company of everyone on the ride. I hope to see you all again one day. 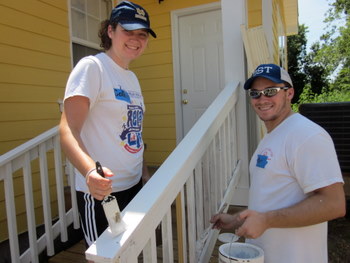 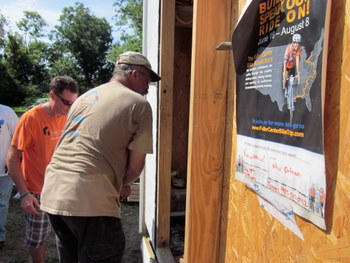