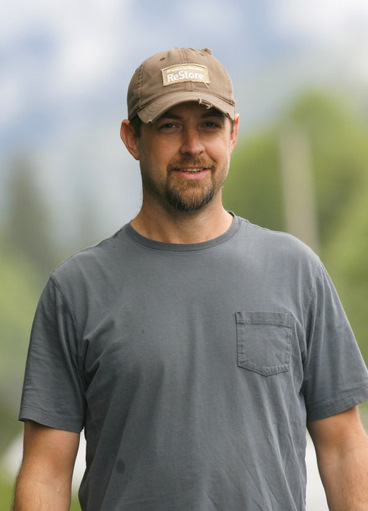 Sometimes you meet people and you share an instant attraction or connection with them. I met Jerry Roadfuss over the phone four hours out of Heber, UT. Something about the way he said, “Brother” told me that this was a guy that I was going to connect with. He had a sincere and ripened honesty to his voice. He used the word “brother” as he was telling me that we were going to have a great time in Heber. I believe his words were, “You’re going to have a great time in Heber, brother.” I trusted that we would.

Allen Slabaugh, our Fuller Center Bike Adventure trip leader, was cutting it close in Heber with regard to a place to stay. Luckily, with a couple of connections and a few last minute phone calls, Allen was put in touch with Jerry and not only were we able to secure a place to sleep (our main concern) but Jerry, with the Lord by his side, was able to provide our entire team with dinner and an outdoor concert at Homestead Resort.

And Jerry was just getting started. Heber Valley has an underground mineral hot spring nestled inside what anyone not knowing any better would only see as a hill. Again, our entire team was able to enjoy a private experience in “the crater”. Not all of us went swimming in the crater, some opted for a ride back to the church to catch up on some much needed sleep. But those of us who did take advantage of the free swim in almost-hot water were able to come out refreshed and ready for some serious sleep.

For me personally, the time I spent with Jerry was very meaningful.  He shared that he had seen some lows in his life that allowed him to appreciate the mountain that he was on since coming to trust in the Lord. From every word that he spoke, you could hear a man that was energized by spirits beyond him. His energy is infectious. I found myself at a loss for words when he told me in his car that dinner was “taken care of.” I tried to speak, but I was so moved by all that God had done for us through him, I was only able to mutter something inaudible. I think Jerry knew how I was feeling as he put his hand on mine and said, “The Lord provides.” He then showed me around the area as we drove to borrow a van from Richard Souther and Heber Valley Baptist Church.  The church allowed us to use their van in conjunction with ours to quicken our drive to dinner, a concert and the hot springs swim.

I may never see Jerry again (although we have each other’s information and I’m sure I will speak with him again) but the memory of the few hours I spent with him will stay with me for a long time to come. Even if my memory fades, the essence of my experience in Heber will remain with me. The food, concert, swim and rest were great, but something far more lasting happened to me that day. It’s something that I hope I can pay forward to someone else. Thanks Jerry.