When your fingers are too frozen to properly type, you feel like you’ve been exercising all day just from shivering and 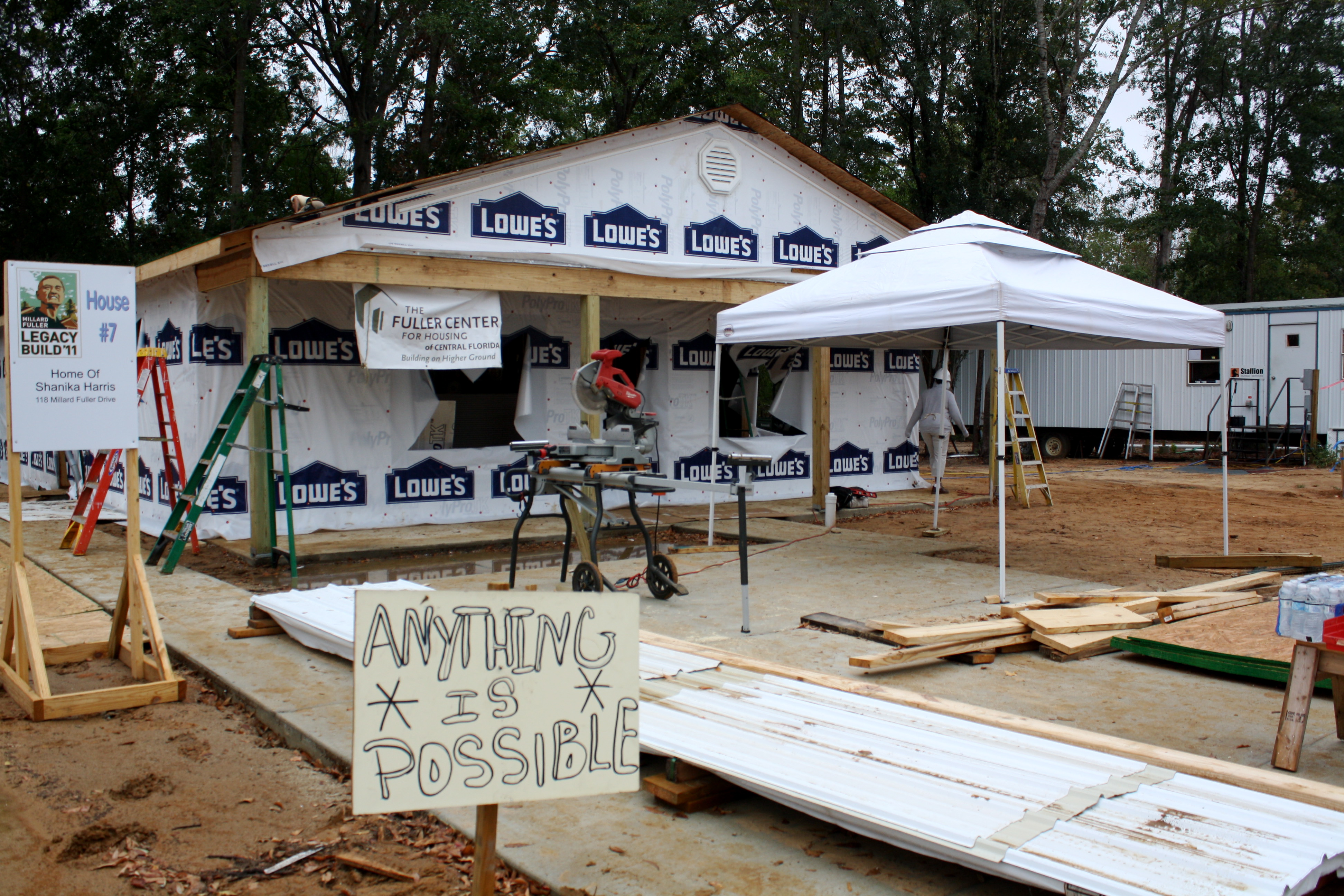 shaking and your brain feels like it’s waiting for a spring thaw (sorry for any typos in this blog), you know it’s officially cold.

Today is one of those days. Never mind that the thermometer says it’s 54 degrees. With a damp, bone-chilling, blustery wind blowing through the worksite, and a chilly mist turning yesterday’s dust into sinking piles of mud, it may as well be –54 to me.

But surprisingly, the volunteers on site seem far less affected by the inclement weather than I – they’re still hard at work, swinging hammers, climbing roofs and carrying on cheerfully. Many of these workers were also on site much longer after supper last night, working on the houses under the glare of street lamps and headlights.

These volunteers, many of whom have paid to travel across the nation to work on building houses for strangers in need, and who probably took their vacation time and their personal time to do so, never cease to amaze me. Their raw determination and optimism inspires me, motivates me, and I must confess, sometimes confuses me.

Why do they do it? Why deliberately travel out of your comfort zone to endure the many variables (such as weather) of the construction site?

Ask any of the volunteers that question, as I have many times over, and you’ll get virtually the same answer from everyone, with little variation – because it’s the right thing to do. Because even though they’ve never met the people for whom they’re building houses, they’re not strangers. They’re part of the same community, the same human family, and family members take care of one another no matter what. These are the people that truly make the world a better place and fuel The Fuller Center’s work in every corner of it. They are, in a word, awesome. 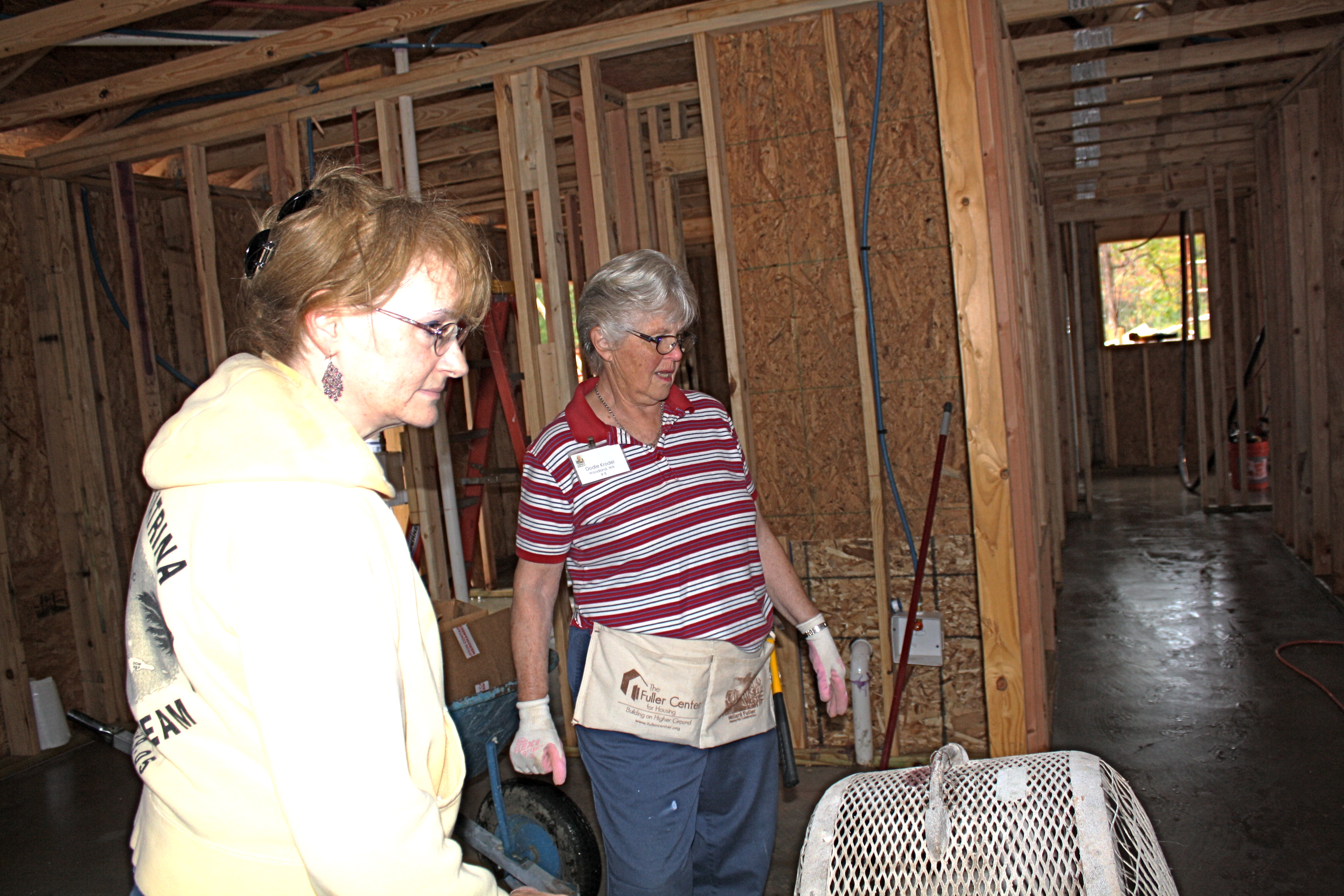 Dodie Krodel, a volunteer who traveled all the way from Washington to work here in Louisiana this week, is in the ranks of these hardy, optimistic people.

Krodel has been volunteering with The Fuller Center since 2003.

“Sometimes the work has been harder than other times,” she said. “People have been really nice as far as being able to teach me – I’m an unskilled person, but if you tell me and show me, then I’m happy to pitch in and do the job.”

But for the first time in her history as a volunteer on the construction site, the 78-year-old was injured yesterday and had to pay a visit to the emergency room.

“I was holding a panel, an interior panel. Volunteers were behind me, and they had one. I don’t know what happened, except that it came loose or somebody didn’t hold it, and it came back and fell across my back hip,” Krodel said. “It sort of just jumped up on me, it startled me. So I’ve got a big bruise. I got checked out at the hospital … I felt badly. I felt like I left the crew down because I was not there in the afternoon.”

But today, she’s back on site and full of energy.

“I didn’t break anything. I’m fortunate because I could’ve gotten hit in the head. Of course, that’s probably the hardest part of my body,” she laughed. “They said I could expect to be stiff and sore for some time. But I’m back here and I’m going to work it all out.”

A true optimist, Krodel was even cheerful about today’s cold and rainy forecast.

“I’m really glad that the sun isn’t out today … once the sun is out it gets pretty hot,” she said. “I didn’t realize how long it’s been since they’ve had rain in the area. So I guess it was a blessing.”

And for some of us more than others, that blessing was very well disguised.

Check out a video by Scott Umstattd on the less-than-warm weather on site today: