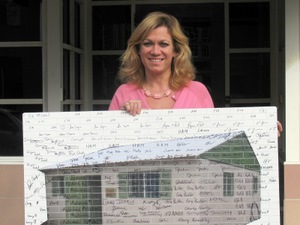 "It was an overwhelming success," FEA’s Mary Thomas said of the event she helped plan.

FEA Chief of Staff, Alfreda Davis suggested a Haiti fundraising reception in an effort to organize the general desire felt among the staff to help with the crisis.

The rest was left up to Thomas who took the idea and ran with it, doing whatever she could to maximize the fundraising potential.

She thought people might be more willing to open their hearts and pocketbooks if they could see exactly how their money would help families in Haiti. FEA’s IT specialist Tom Fackender, also president of the Tallahassee Fuller Center for Housing, directed Thomas to this Fuller Center Haiti link. The pictures, stories and 3-D house plans for rebuilding in Haiti found there demonstrated just what she was hoping for.

She set forth with plans to raise the funds to build a $3,000 Fuller Center Haiti House at the Feb. 18 reception, partnering with others to design creative fundraising props and incentives. One (shown in photo above) was a poster with bricks drawn atop a photo of the Fuller Center Haiti house model.

"When people would donate, they would sign a brick for every $10 donation. The goal was when all the bricks were filled, we had paid for that home," Thomas said. 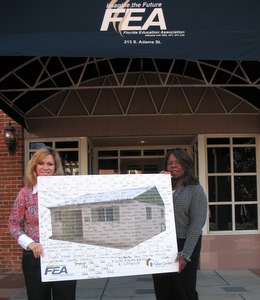 By the end of the night, FEA had far surpassed their goal, collecting enough funds to build three homes. Based on the growing interest, they now hope to build five homes.

Thomas also came up with the idea to give away brick key chains to those who "sponsored" a brick with a $10 donation.

"I think it made a huge impact on our success. Most people are willing to donate $10 when they can see that they actually paid for a ‘brick’ of this home," Thomas said. The generosity and out pouring of support were amazing.

Even the hotel where the event was hosted got involved, donating a gift certificate for a weekend stay so that with each $10 given, donors were entered to win the certificate.

After $3,585 were collected during the event, the Florida Staff Organization, FEA’s internal staff union, led by Michael Monroe, voted to sponsor two additional homes, bringing the total to $9,585.

"And our retiree chapter is voting this week to sponsor one additional home," Thomas said.

"The idea of building durable, affordable housing for those in need touches all of us," Thomas said. "I believe this is just the beginning of the FEA’s involvement with The Fuller Center."

Donate to the FEA Haiti House fundraiser through their personal campaign page here.

Check out the Haiti page that inspired the fundraiser here.