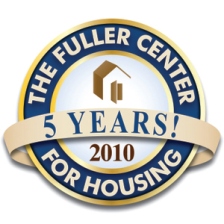 It’s been five short but extremely busy years since The Fuller Center for Housing was first transformed from Habitat for Humanity.

Charlie Park, executive director of the Fuller Center of Webster, said the organization is commemorating its fifth anniversary by rolling up its sleeves and doing what it does best.

“We’re putting your donations to good use and helping to lift people out of poverty by working with them to build safe, decent, affordable housing,” Park said.

Between March 15 and 27, Fuller Center for Housing is returning to Louisiana, where the initial effort began following Hurricane Katrina, to construct five houses with the three covenant partners in Louisiana.

“You are invited join in to help with these special projects,” Park said.

Fuller Center of Webster will be involved in two houses – one in Minden and the second just outside of Springhill – technically in Shongaloo.

“The Minden house is the home of Minnie Hawkins, and it was begun in November,” Park said. “With great volunteer assistance from Pleasant Valley United Methodist Church and a terrific group of college students from Saint Anselm College in Manchester, NH, this house is moving rapidly toward completion.”

Park said Fuller Center of Webster will be blessed during the two weeks of March 15 – 27 to have six RV Builder couples coming to Minden with their RV rigs.

“These great volunteers will tackle all the finishing work for the Hawkins house,” he said. “The dedication for the house, at 615 Martin Luther King Drive, is scheduled at 1:30 p.m. Friday, March 26.” Continue reading >>

Learn more about The Webster Fuller Center of Housing here.