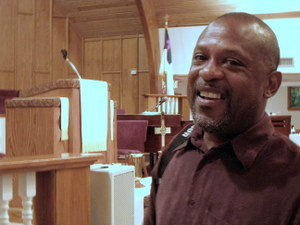 Mount Canaan Baptist Church in Shreveport, La. opened its gymnasium and other facilities up for 42 volunteers from the University of Minnesota to sleep in last week during the 5th Anniversary Build. Assistant to the Minister, Harry Blake, Jr. joined the students in case anything was needed. (His father, Harry Blake, 75, is the minister of Mt. Canaan.) He took a moment to talk about his connection to The Fuller Center:

I wanted to be here because I know this is important to my dad, and Dad believes that everyone needs a help up and not necessarily a hand out, and that’s what his life has been about.

(CONTINUE READING>>)
My dad worked for Martin King, Jr. for many years. And because of that I got to see some of the turbulence in the early 60s. But some of the same people who did not position themselves to mean him good came around through love. Love is perhaps the strongest force on the face of the planet.

I think my dad is a phenomenal person. He just seems to have a lot of answers and a lot of key components on how to live to the fullest. In my era young boys grew up with heroes like batman and superman. I was blessed to have a hero in my household which happened to be my dad.

I wanted to be a part of his life in his declining years.

I think Millard Fuller had the same vision that my dad had. There are four houses here on the west side of the facility that are a part of the initial dream that my father had. I think it is remarkable how it all came together at the same time. Dad has always felt that it’s not just enough to give people new houses, you’ve got to change their hearts.

It’s good to see the projects come together as they have.

We had an opportunity two years ago to have Mr. Fuller share with us in one of our services. He is a phenomenal man. He was very mild and meek in his spirit and it seemed like I had known him a lifetime. It really did. There were so many traits that he had that were very characteristic of my father. And the warmth radiated from his countenance. I felt like I was at home with him.

I think what is being done is sorely needed. And I applaud the Center for all that they are doing.

More about Mount Canaan and The Fuller Center 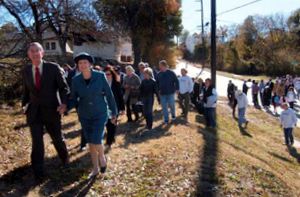 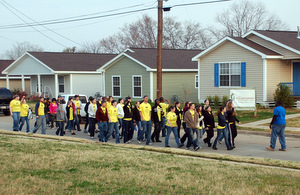