Walking out the door of The Fuller Center for Housing’s headquarters in Americus, Faith Fuller refused to say goodbye.

But she wasn’t being rude.

Friday was Faith Fuller’s last official day after two-plus years as Vice President of Communications. But when your last name is Fuller, and your parents are Millard and Linda, there’s no goodbye. Instead …

“See you soon,” Faith said to her colleagues, as if it were just another Friday afternoon. 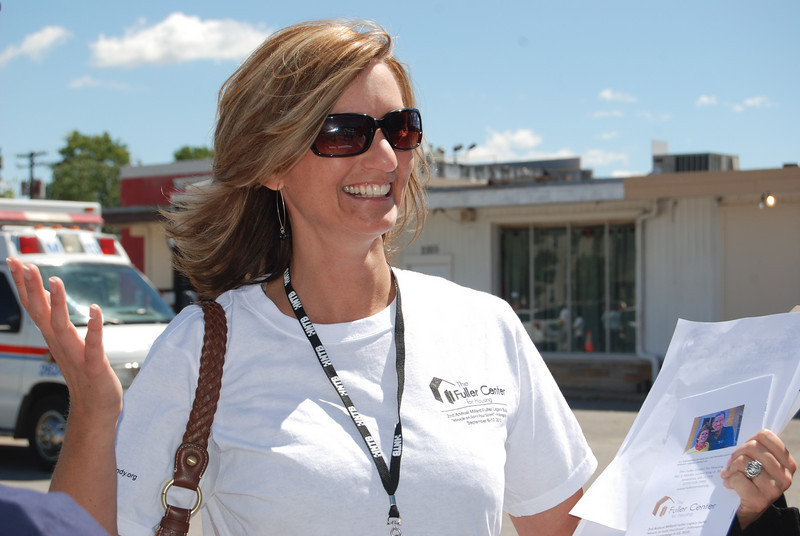 It wasn’t, though. Faith, Millard and Linda’s third child, officially handed over the reins to new Director of Communications Chris Johnson a couple weeks ago. Now, she’s looking forward to a “time of change.”

“I’ll never be able to separate myself from it,” Faith said of The Fuller Center and the mission to eradicate poverty housing. “I’m just going to take a break. I’m going to take a sabbatical and work on some personal projects. … Honestly, this is a time of exploration, a time of change, a time of renewal.”

Though Faith has always been involved with her parents’ ministry, she never had planned to become a full-time Fuller Center worker. But when her father died unexpectedly on Feb. 3, 2009, it changed everything.

“There was no other choice,” Faith said. “Both my mom and I just had to dive right in. It was a crisis. … There were a lot of questions, a lot of unknowns. So I just felt like I needed to come in and help and kinda help stabilize everything.

“My Dad was always trying to get me to come and help, and I just always wanted to do my own thing,” she added. “So it’s ironic that after he died is when I came on board. I was always helping on side projects here and there, but I always felt like this was my parents’ thing, and I just supported them when I could.”

Though there was brief period of uncertainty about The Fuller Center’s future in the immediate aftermath of her father’s death, it wasn’t long before Faith recognized there was a determined core of people who would be able to carry on and grow her parents’ ministry. She credits much of the success since her father’s death to David Snell, the only other president The Fuller Center has had.

“David Snell was phenomenal,” Faith said. “He was the right man at the right time to help The Fuller Center transition through that process. He was a real good calming spirit, and he’s real passionate about The Fuller Center. He helped take us into that next phase. I was just part of that team.

“Of course, we miss my Dad, but we’ve got some really good people who keep things moving forward,” she continued, adding that the forward movement stretches far beyond the headquarters in Americus. “The Fuller Center is very strong right now. It’s phenomenal. I mean, where do these people come from?! There’s this group of people out there who are just so dedicated and so passionate about what they’re doing. They just have a heart of gold, and they’re trying to improve the world. There seems to be a real need for The Fuller Center and the grass-rootsy-ness of it.”

“Faith came to us in a time of crisis to help out for six months,” Snell recalls. “She ended up staying two and a half years and during that time totally revamped our communications efforts. The Fuller Center is a better place for the time that she spent with us. We wish her the very best in her new pursuits, but since her name is Fuller, she’ll never be too far away.”

Faith said having full confidence in her replacement makes it easier to leave. And the new director of communications said he is thankful to have followed Faith.

“Faith definitely inherited her father’s charisma, and that makes her an easy person to follow and to learn from,” Johnson said. “And she’s been diligent – extremely diligent – about making sure I became familiar with the job and making sure I knew I could still call on her if needed. She’s passionate about this place and this mission.

“Often, when you follow in someone’s footsteps, they might secretly hope you don’t do as good of a job,” he added. “Faith clearly wants our communications team to become more and more successful. And, we’ve had a good time during this time of transition. She’s a delight to work with … even if she does call me a ‘smart-aleck’ sometimes. At least she does it with a smile.”

Among the things the 1985 graduate of Americus High School plans to do during her “time of renewal” is revisit “Briars in the Cotton Patch,” the highly-acclaimed documentary about Koinonia Farm, the place that planted the seed in her father’s head and heart about starting a housing ministry. Next year marks the 70th anniversary of the community, and many events will be planned around that, including the Clarence Jordan Symposium, named for the founder of Koinonia and author of the “Cotton Patch Gospel.”

Faith plans to continue living in Americus for the time being. Her husband, Scott Umstattd, currently is volunteering with The Fuller Center as the media coordinator for the Fuller Center Bike Adventure team, which is on a 3,600-mile, cross-country trek this summer.