If the addition of our latest covenant partner in the Magnolia State leaves you “All Shook Up,” that’s understandable. The Fuller Center for Housing of Lee and Pontotoc Counties is based in Tupelo, Miss., birthplace of the King of Rock ‘n’ Roll, Elvis Presley. 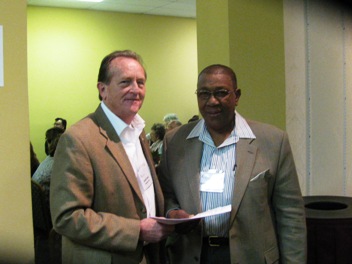 “George Pritchard has a passion for his community and so should we,” FCH Director of U.S. Field Operations Kirk Lyman-Barner said of the new covenant partner’s president. “After all, it was in Tupelo in a little Assemblies of God church that Elvis Presley learned music from both white gospel and African-American singers. In turn, the fabric of what Elvis absorbed in Lee and Pontotoc counties influenced and forever changed rock, pop, country and gospel music.”

The new covenant partner joins two others in Mississippi: Greenwood/Leflore and Yalobusha County.

Lee County, of which Tupelo is the county seat, has a population of 82,910, while Pontotoc County has a population of 29,957 according to the latest U.S. Census Bureau numbers. The Fuller Center Bicycle Adventure’s Spring Ride (March 11-17) will come through both counties as the scenic Natchez Trace Parkway winds through the area in northeast Mississippi.

In each county, more than 13 percent of the population lives below the poverty line. But the number of seniors living below the poverty line is 15 percent in Lee County and 23 percent in Pontotoc County. Helping seniors with low or fixed incomes to repair their homes will be the top priority for the covenant partner with as it focuses its efforts on Greater Blessing projects.

“Beyond the cultural and historical significance of this area, there are real people struggling in an aging housing stock,” Lyman-Barner said. “In Tupelo alone, more than 40 percent of the homes were built more than 40 years ago. In the outlying rural areas, the poverty is even worse.”

Of course, few can think of the Tupelo area without thinking of Elvis, including Lyman-Barner.

“George has offered to take me to visit the hardware store where Elvis bought his first guitar,” he said. “What an impact that made! Now, think of what the impact on the community could be when the Fuller Center of Lee and Pontotoc Counties completes its first Greater Blessing project. Who wouldn’t want to be a part of that story?”

Want to be a part of that story? Click here to donate.