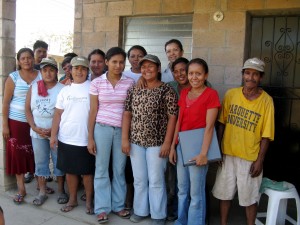 Residents of the Fuller Center community in San Luis Talpa – the location of November 2008’s annual Millard & Linda Fuller Blitz Build – held their first formal meeting on Friday, February 27th, with members from 12 of the 22 families present, constituting a majority. The homeowners invited Mike Bonderer, Fuller Center director of operations for El Salvador, and his wife Zuze to attend and surprised them with two announcements: the election of a governing council and the decision to name their newly-formed community in honor of Millard and Linda Fuller.

The land on which the Fuller Center houses were built is still officially called Villa Santa Clara, but residents unanimously said they wanted to change the name to Villa Millard and Linda Fuller. “This caught us by surprise, but it became clear that they had been meeting privately and had been thinking about all of this for some time. They also said they wanted to do something special for the passing of Millard Fuller,” states Bonderer. 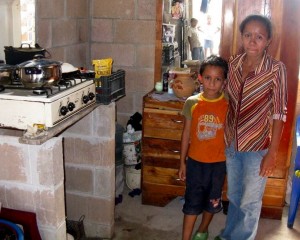 Next they nominated and voted on members of the directiva, or governing council. Sara Orellana, homemaker and mother of three, was elected head of the council. Says Bonderer, “It was obvious that they had been meeting and had worked out the governance in advance. I will work with our lawyer to record the election and file papers so it can be presented to the alcalde (mayor) for official recognition.”

The homeowners then continued to discuss community issues. Families are moving into their new Fuller Center houses quickly now that the project recently passed government electrical inspection. They are also preparing for volunteer teams from the University of Cincinnati later this month and from Georgia Southwestern State University in May. “It was truly moving to see new neighbors coming together to make decisions for their common good,” according to Bonderer.