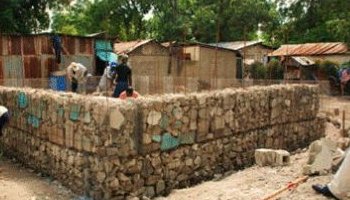 DECATUR, Ga. (ABP) – The Cooperative Baptist Fellowship is entering a new relief phase in Haiti, moving families into permanent homes built from the rubble created by the Jan. 12 earthquake that left them homeless.

The newly formed Haiti Housing Network is a collaboration of the Atlanta-based CBF, Conscience International, Fuller Center for Housing and Baptist General Convention of Texas.

Using rubble from a family’s previous home, permanent housing for earthquake victims can be built for about $3,000.
The network has set a goal of building 1,000 permanent homes in the area of Grand Goave, Haiti, over the next three years.

"These are perfect projects for churches," Tim Brendle, a former missionary to Haiti who has been coordinating the Fellowship’s relief efforts in Grand Goave, told the CBF Coordinating Council Oct. 14. "We will encourage churches to provide the funding and a volunteer team to come to Haiti and erect these as long as the need continues."

Using hard work and ingenuity, Brendle said mission volunteers will be able to build modest houses for Haitian earthquake victims for about $3,000 each.

Beginning with a trench foundation, steel mesh is erected into a basket-style wall form that is filled with earthquake rubble broken up with sledgehammers.

Field-made metal hooks keep the mesh evenly spaced. When the wall baskets are filled, mortar is added to stabilize the structure. Additional coats of mortar provide a finished look, not unlike a concrete-block exterior.

Add a wooden roof frame covered with tin, Brendle said, "and you have a very serviceable home."

The technique was developed by Conscience International, a humanitarian and advocacy organization that has a formal partnership with the CBF.

Using materials from a family’s destroyed home allows them to remain in their old neighborhood. It aids with cleanup and solves complicated land-use issues. Construction materials are purchased locally, and Haitians are employed, boosting the local economy.

Nine months after the Haiti earthquake, Brendle said housing remains a critical issue. Hundreds of thousands of people are still without reliable shelter, living in tents amid elements like heat and rain and the constant threat of living in an earthquake-prone zone.

"Many families with young children are eager to get out of tents and into such houses," Brendle said. "As we learn and perfect this process, dozens of these houses can be built, providing permanent starter homes for Haitian families."

Brendle said the homes will have a small porch in front and a privacy enclosure for a shower in the back. They also will have a composting toilet.

Because of the strength of the steel basket and the fact that the contents are allowed to shift during an earthquake, he said engineers believe the houses will withstand an 8.0 earthquake with only minor cosmetic damage.

Sign up to lead or volunteer with a Global Builders team to Haiti!