More than 60 community members came to show their support. Chair of the local Americus-Sumter Fuller Center board, Kirk Lyman-Barner, said he counted 375 people who have volunteered, donated to, or somehow been involved with the home’s progress.

“It’s amazing to tally up all the people who have been involved. Some are on site week after week. Some come through behind the scenes. We need and appreciate them all,” he said.

The handicap-accessible duplex will be home to Americus’ Chuck Davis and Thaddeus Harris. Both men are in wheelchairs—Davis has cerebral palsy and Harris was paralyzed in an automobile accident. As part of the ceremony, Davis and Harris signed contracts for the home purchase that outline the terms of the zero percent interest mortgage.

Thursday’s celebration coincided with Earth Day in order to recognize the efforts taken on the home to reduce future energy consumption and costs.

“We wanted to pause on Earth Day to encourage Fuller Centers around the world and others to build energy-efficient and appropriate homes,” Lyman-Barner said. “And we want to honor Chuck and Thad.”

“Earth Day means something now,” Harris said. “It’s got a real true meaning. With the house being so energy-efficient, I understand more than I ever did.” 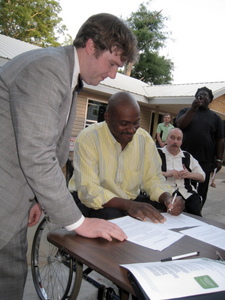 The homeowners were also honored with Bibles, prayer, music and time to share and give thanks. Goldie Burts, Harris’ mother, led the group in a song, “When the Saints Go Marching In.”

Americus Mayor Barry Blount opened the ceremony with prayer and President of The Fuller Center for Housing, Inc. David Snell gave a blessing.

Project manager, Thomas McFarland spoke about Thad’s congregation coming out to support him.

“You might think he’s limited, because he’s in a wheelchair,” McFarland said. “But if you know him, you know there are no limits, but the ones we put on ourselves.”

Harris addressed the crowd on behalf of himself and Davis.

“We’re strong, but we’re limited at certain things,” he said. “In doing this, y’all have made us independent. You don’t know how much you’ve blessed us by doing this, so thank you.”