The Fuller Center for Housing is seeking support for “Bolomba: The Way Forward” — a special effort to raise $25,000 to fund a portable sawmill and block-making machine that will allow the families of Bolomba to build high-quality homes at a much faster pace than in the past. To learn more about “Bolomba: The Way Forward,” click here to view the information sheet.

If you would like to donate toward the effort, you can click here to give online or send a check made payable to “The Fuller Center for Housing” with “Bolomba” in the memo line. Mail to: 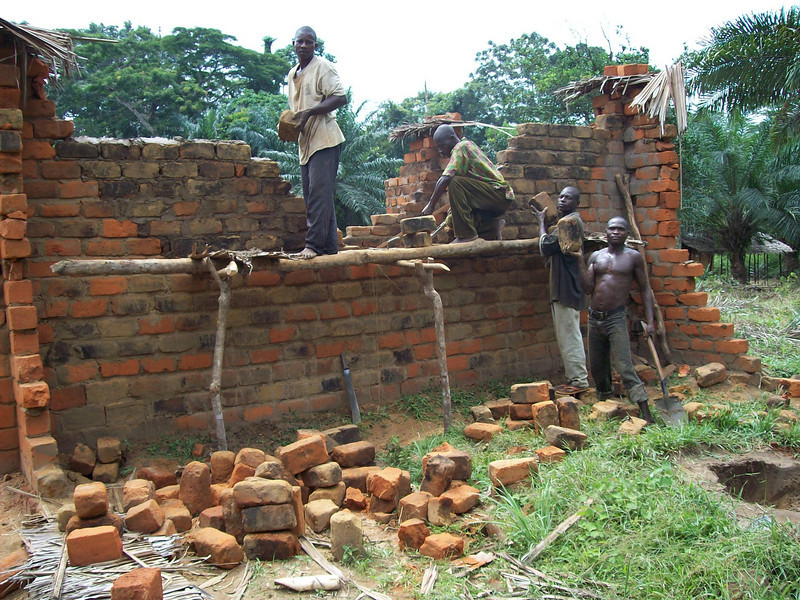 In 1973, Millard and Linda Fuller arrived in Mbandaka in the Democratic Republic of Congo (then called Zaire) to begin what was to become history’s greatest effort to eliminate poverty housing. The DRC was where Millard and Linda Fuller first implemented the concept of partnership housing. Working in a neighborhood called Bokotola in the city of Mbandaka, they built the first Habitat houses, which still stand today as tribute to their vision.

The Fuller Center Bolomba Likolo was organized in the summer of 2007. Despite its remote location, the absence of a local bank, no nearby store to purchase building materials, inadequate roads and transportation methods and an unpredictable rainy season, work progresses as the people of Bolomba pour their hearts and souls into the project. Over 200,000 houses later, the vision born and work started in that remote corner of Africa has begun anew. The Fuller Center is in the Congo at the invitations of the Hon. Pierre Maloka, a member of Parliament and friend of Millard and Linda’s from many years ago, and Dr. Jim Conway, who works with USAID in Kinshasa.

BACKGROUND
The DRC is one of the poorest countries in the world, with a per capita annual income of about $300 in 2007. This is partly the result of years of war. Visiting Bolomba, accessed by a six-hour ride on a riverboat from Mbandaka, is like taking a step back in time. It is a place without electricity, cell phones or litter — where the people live off the river and the jungle.

GOALS
As people finish clearing their plots, they begin construction of the brick-making sheds. The bricks will be made with the aid of presses obtained from the Hon. Pierre Maloka Makonzi. The bricks are pre-cured. After pressing the bricks, workers must wait several weeks before firing them and at least one or two weeks before using them for construction.

The Fuller Center Bolomba-Likolo has already attracted national interest and has gained the support of the government of Equator Province.