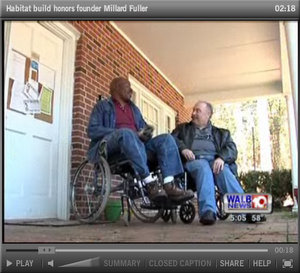 It’s been one year since the founder of Habitat for Humanity and the Fuller Center passed away, but folks in Millard Fuller’s community are making sure his legacy lives on.

"We’re different but were the same," said Harris.

"Yeah, somebody that understands what you are going through," said Davis.

"Thaddeus was hurt in an accident, he became paralyzed from the waist down, Chuck has cerebral palsy," said Kirk Lyman-Barner, Fuller Center Employee.

But both men deal with similar challenges everyday.

"Sometimes when you are in the house you need help with things," said Davis.

Both Davis and Harris recently learned they would be sharing a handicap accessible duplex.

"Chuck said a wheel in shower is better than a sit down shower, so we designed his shower to fit his particular needs," said Kirk.

And it’s all thanks to Millard Fuller, the man behind an organization that has helped change so many people’s lives.

"The reason we are out here is because I know that is what Millard would want us to do," said his wife, Linda Fuller.