It’s a typical day in the Allen household. Married 36 years, Grady and Lovett are trying to hold a normal conversation, but 3-year-old twins charge into the living room after playing outside, squealing and wrestling as they leap onto the love seat where Lovett is jostled as if she were on a roller coaster.

She rubs her aching right side. Since being injured on the job with electronics manufacturer NEC in 1986, she’s had several surgeries that have attempted to at least reduce the nerve damage. She yells for Nedra — the 28-year-old mother of Jaden and Kaden — to take the boys.

But before they can resume speaking, their grandson Jakoby has disrupted the seconds-long peace. The happy 13-year-old with Down syndrome has heard the door open and comes into the room looking for a place to bolt into the great outdoors he loves so much. But they can’t let Jakoby outside unattended for fear that he could run into the street. 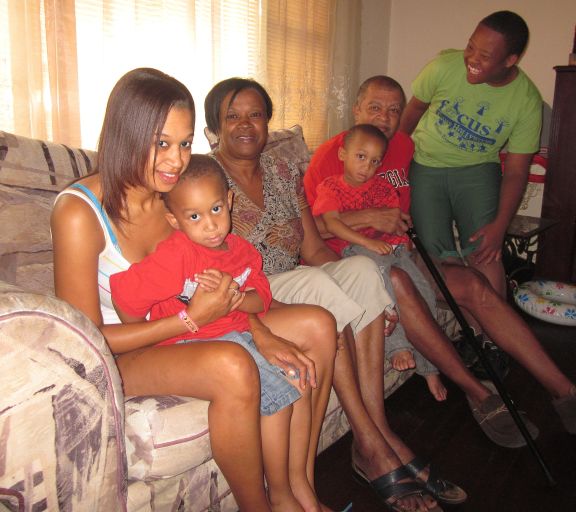 While Nedra takes the twins away, Lovett slowly lifts up to help Jakoby get his bearings after having been jolted from his nap.

The peace that had briefly settled over the Allens’ household is over, but it’s always short-lived with three grandchildren in the home.

Grady also loves being outside but needs to give his aching knees a rest. He drove a forklift at nearby Fort Gillem until he was injured and had to take disability. But Grady wasn’t injured on the job like Lovett. He was injured while working at a local program for mentally challenged children. A young man ran into his leg so hard that it blew out his left knee. But it’s his right knee bothering him today. He had surgery on it a few months ago after injuring it while taking the family dog for a walk.

“When I take Jakoby to the park, I can’t keep up with him,” Grady says. “If we go outside, he’ll run down the street somewhere.”

But he certainly understands and shares Jakoby’s love of the outdoors. After all, when Jakoby’s outside, he’s literally playing in his grandfather’s footsteps.

“I used to play baseball right here when I was small,” he says as he points toward the floor of the home. “There wasn’t a house right here then.”

Lovett and Grady grew up in the neighborhood where they still live — Grady on this very street, George Lemon Drive, and Lovett just over on Simpson Street. They attended school in the building that houses Henry County Middle School just a couple hundred yards away — Lovett when it was Westside High and Grady when it was Henry Training School.

They came from good, hard-working families. Lovett’s father was one of the first black police officers for the city of McDonough. Grady’s father was principal at the school, while his mother was a librarian. Grady and Lovett worked hard to support their family and build for the future. Three decades ago, this is not how they would have pictured their golden years — struggling to get by on disability checks while still raising young children.

“It’s hard; it’s very hard,” Lovett says. “Just with the special needs, that’s hard, and there aren’t many programs to help with special needs. And then the twins, too. Being disabled, it’s extra hard. You don’t get breaks.”

Of course, many people can empathize with the Allens’ situation. According to the 2010 Census, there are more than 2.7 million U.S. households where grandparents are raising grandchildren, an all-time high. More than 6 million American children, about 1 in 12, are being raised by their grandparents.

AMONG FIVE FAMILIES TO BE HELPED

The Allens’ home, whose solid brick exterior belies its interior problems, is one of five homes that will be repaired by The Fuller Center for Housing during the 2012 Millard Fuller Legacy Build in McDonough, Ga. Their kitchen and only bathroom will be the focus of work inside, along with adding adequate insulation and creating a location for washer and dryer hookups so that Lovett won’t have to spend up to $40 every week or two at a coin laundry facility.

Outside, Fuller Center for Housing volunteers will work with the family to install new safety railings on the front and back porches, along with a ramp for the disabled grandparents. Also, a fence will be erected so that Jakoby and the twins can safely play outside.

“It’s going to make a big difference,” Lovett says, noting how she will save a lot of money in doing the laundry at home. “After we pay our bills, we don’t have extra money. I can’t take the kids places. I can’t do anything like that. We just have to pay the bills and stay here. For us, it’s going to be a difference.”

That won’t solve all the issues of having such a full house and little space, but Lovett has experienced that her entire life.

“We don’t really have enough space, but we can’t really do anything about that,” she says. “We just have to do what we have to do.”

Also being helped during the Sept. 9-14 Legacy Build in their McDonough neighborhood are:

Ruth Joyce: Never having married nor had children, Ruth grew up in her current home, where she stayed to take care of her parents. The effervescent woman has worked in Henry County schools most of her life and is a friend to many whom she drives to doctor’s appointments and to buy groceries. But extreme hospital bills have hindered her ability to repair her home, which needs a new roof, porch repairs, bathroom renovation, insulation and drywall repair.

John Price. One of nine children, John grew up in the 1,000-square-foot home where he has lived since returning to care for aging parents and a sister with special needs. Retired with a disability, John is in constant pain. Scheduled work includes building of a ramp, widening doors to make them ADA compliant, plumbing repairs, new windows, insulation, and kitchen and bathroom repairs.

Sara Hunt: A long-time worker in the restaurant industry, Sara lives in the house she grew up in and was willed to her by her mother. Her years of being on her feet and a terrible auto accident have caused damage to her legs and ankles, whose metal pins cause her great pain. The work schedule includes reinforcement of flooring, roofing repairs, porch repairs, insulation, installation of energy-efficient windows and replacement of fixtures to make them ADA compliant.

Josephine Gaston: The single woman has worked all her life, but forced retirement has left her unable to make needed repairs to her home. The work schedule includes a new roof, fascia repair, door and window replacements, new bathroom fixtures and insulation.

Meanwhile, there is an international hub of the 2012 Millard Fuller Legacy Build, where Fuller Center volunteers will build 10 new homes and plant 2,500 trees in the mountain community of La Florida.

Learn more about the Millard Fuller Legacy Build,
including how you can participate or donate, by clicking here.