By Johnny Edwards
The Augusta Chronicle 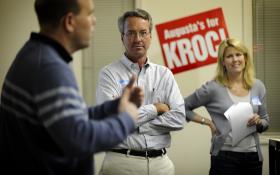 Businessman and developer Clay Boardman, hoping to jump start the Harrisburg revival that’s expected with the coming of the Kroc Center, announced a new program Thursday, aiming to rehab dilapidated houses the same way Habitat for Humanity builds new ones.

He and Anne Catherine Murray, the project manager for Boardman’s Augusta Capital LLC, told a meeting of the Harrisburg-West End Neighborhood Association that they’ve formed an Augusta branch of The Fuller Center for Housing, with the mission of sprucing up Harrisburg’s housing stock through volunteer labor and selling them to responsible, low-income families.

According to the city’s License and Inspection Department, 77 percent of the former mill village’s houses are being rented, and 14 percent are vacant.

"What we need to do is promote home ownership in Harrisburg," Boardman said. Continue reading >>

Learn more about the workout the young Covenant Partner in Augusta is doing on their page.

Donate to the effort to revitalize the Harrisburg now by clicking here.