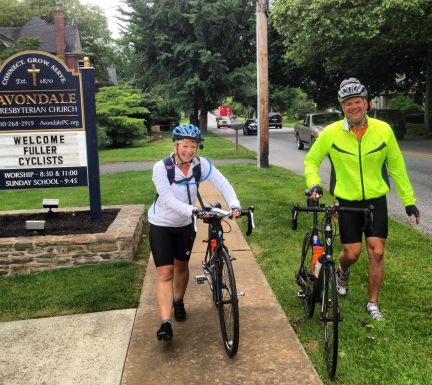 This is called a “bike adventure” not just a bike “ride” right?!

We left the church at 7:30. Things were going as expected, riding through Philly was both smelly and busy, as well as a little intimidating for some riders. However, we survived!

We had some rain showers on and off most of the morning and early afternoon.  After our 50-mile rest stop point, we thought we had an easy 17-mile finish. … But this is where it all went south (or you could say north on U.S. 1) and the real adventure began. Kelsey Merz and I took off from the rest stop and pretty quickly took a wrong turn. After climbing several very steep and long hills in the POURING rain, we felt pretty proud about how we handled them, but decided to confirm that we were still on the right route. Amazingly enough? We were not. We in fact were 8 miles off track.

We then found ourselves revisiting the same hills, still in the pouring rain mind you. Thinking they would all be downhill this time, but sadly we had forgotten the downhills from before that felt so great were now some serious inclines. Finally back on track, we quickly discovered how dry the ground around us was, especially in comparison to how sopping wet we were. Had we not made the wrong turn, we could have avoided both the hills and the rain.

The adventures only seemed to haunt us for the remainder of our “17-mile” ride, they included more rain, a stop at an elementary school where we thought we were nine-tenths of a mile out from the church when in fact we were 9 miles out, numerous interactions with locals for further direction, and to top it all off, I had a bit of a crash going 19 mph over some wet railroad tracks.

We finally made it to Avondale Presbyterian Church, soaked to the bone, exhausted, scratched and bruised, and, of course, laughing.  What was supposed to be a nice 67-mile bike ride turned into an 82-mile bike adventure.

YOUR DONATIONS MAKE THIS ADVENTURE PAY OFF FOR OTHERS!