In today’s dark, early hours, while most huddled indoors and out of the weather, a group of tool 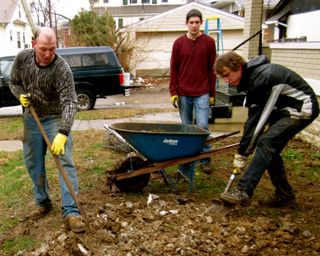 belt-clad volunteers arrived at a rain-slick street in the Shawnee neighborhood of Louisville, KY ready to work.

They were there to kick off the Derby City Build, a project started by the Louisville Fuller Center that aims to help the residents there by renovating or building five houses over the course of four days.

“We’ve been working on this for close to three years now, but it’s really taken on a life of its own,” Alex Crume, director of the Derby City Build construction, said. “The rain has slowed us down, but not an awful lot. It’s amazing, people just work right through it. Everybody is still upbeat and ready to go.”

While some of the volunteers are local to Kentucky, most have traveled from around the country to be a part of the build.

“I think this week we’re here because we want to be a part of something that’s a bigger story than just our own – a story that that’s intended for everyone to play a part in,” Emily Bevington, a volunteer from Boston and an employee of Sojourn Collegiate Ministries, said.

“It’s exciting knowing what’s coming and what’s going to change here over the next few days.”

Juanita Ingram, who will move into her new house at the end of this week, said she has also experienced this excitement since she found out she qualified for a Fuller Center house in February. 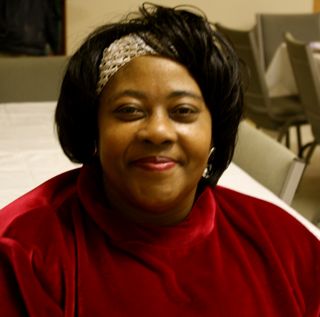 “When I got the blueprints in my hands I almost passed out. I got so excited I couldn’t sleep. I kept getting up and looking at the blueprints, looking at the paperwork. I was just so excited for this opportunity, and so thankful. I appreciate all of the volunteers who are helping in any way that they can. I know it’s from their heart and I do feel privileged,” she said.

Ingram, a mother of eight and grandmother of nine, said she grew up in a family of ten children and parents who always had their door open to strangers.

“No matter where I’ve lived I’ve always opened my doors up to people. I’ve even had people stay with me because they’ve had misfortunes. My mother was like that, my father was like that,” Ingram said. “I consider this a great opportunity to be able to receive this house because I know it will enable me to be – even more – a person that can give back.”

She said her parents would have been “very happy and probably in tears” to see her become a homeowner.

As a Fuller Center homeowner, Ingram is required to put in sweat equity hours to help build her home, and also will pay a monthly mortgage.

Annie Buford, who owns one of the homes that the Fuller Center volunteers will help renovate this week, also said she’s enjoyed working with the volunteers so far.

Buford, who has been in the Shawnee neighborhood for 30 years, had to retire after becoming sick and needed a hand with home repairs.

“It’s just really nice to see everyone helping out … it’s neat to have it in our neighborhood,” she said.

Of course, the hard work in Louisville has just begun  – but so has the excitement, according to Crume.

“The most fun part is giving them the keys,” she said.

Learn more about The Fuller Center’s projects in Louisville