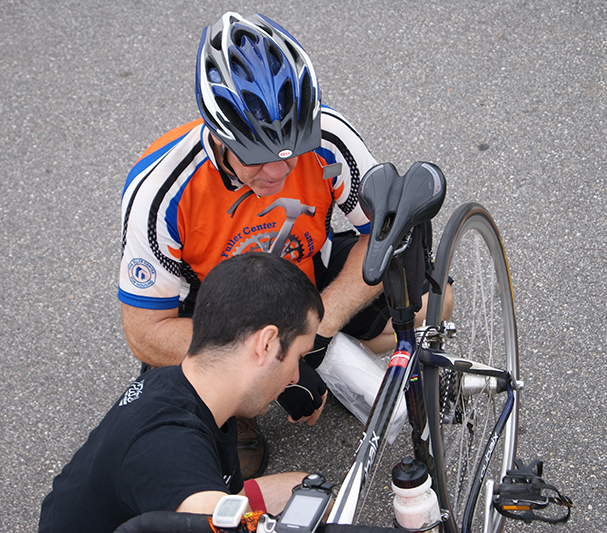 I’m looking for an adjective to describe today. All I can come up with is a noun – adventure. It turns out flat tires are pretty tame when it comes to adventures – no flats today, but plenty of … fun?

The day started seriously enough with a devotion by Brian (Jen – your husband is and awesome “big brother” on our team) speaking about the necessity/inevitability of suffering. We then proceeded to climb 1,800 feet in our first 17 miles, 2,200 feet by the first rest stop (25 miles), 3,200 by mile 50.  Grades included 14%, 10% and two 11’s. Brian, could we have a different topic next time? To several of us the climbs of yesterday (3,950 feet in 74 miles) and Sunday (2,300 feet in 54 miles) seemed tougher.  Maybe we’re getting stronger?  According to the stats, the first half of the day was brutal, more level after that. Total ascent for the day was 4,600 feet in somewhere around 90 miles – not really sure since so many people missed turns and got lost that we all had different mileage numbers at the end. The official number was 89.3.

Other adventures included a dog that liked to chase whoever was at the head of a group; purchases of Neosporin and Chapstick; and two of us losing momentum on a beautiful downhill by jamming on our brakes thinking we were at the rest stop (false alarm).

Not all the adventures were of the negative variety. Gary, owner of  Pedal Power Bikes in Middletown, stopped at our rest stop and asked who needed help. Alyssa’s shifting needed some adjustment and he fixed it for her. My shifting problem turned out to be a bent tooth on my middle chain ring and a worn chain. He fixed the tooth with a rock, but I decided to go for a permanent repair if possible. He called ahead to his store and they opened early to replace my chain and second ring in only 45 minutes lost riding time. Wow, what a difference! It’s like I have a new bike!

Remember that hodge-podge of ending mileage numbers? Tonya’s was 92 and she had not yet biked a century.  So … with some moral support from Kelsey (the one who didn’t have a birthday yesterday) Tonya rode an extra 8 miles to finish at 100.2 – her first century in the books! Oyee!

The biggest adventure of all did not happen. We had forecasts of showers and thunderstorm possibilities – 40% – so apparently the odds were in our favor. No one got wet and the cloud cover kept us much cooler than yesterday. Thank you, God.

Speaking of odds – Carmen biked every mile of the first 50 with all that climbing. She felt so lucky at the top of the steepest climb she bought herself and her companions each a lottery ticket. Oyee, Carmen! (She had a couple of winners, but not sure she broke even). 🙂

We were late getting to showers and late to dinner, which fortunately was prepared for us by Cindy, a nearby resident whom Tonya met at the Legacy Build in Minden last October.

So we did have suffering, Brian, some of which I mentioned, some not. And fun. And luck. In other words, an adventure!