It is a privilege to have an opportunity to contribute to this blog.  As the newest member of the group, my perspective and perceptions are undoubtedly different from those of the seasoned riders.  I joined this group for the last leg of this adventure and am thrilled to be participating, even if it is for a very short time.  I heard about FCBA from my friend Mark Major and was immediately intrigued by it.  I have been in the real estate business since 1999, and know the joy that people experience from moving into a new home.  I am committed to supporting worthwhile causes whenever I can, so I was thrilled to hear about a ride dedicated to eliminating poverty housing.  I was also delighted to see that riders could participate in just segments of the ride.  Living in the Seattle area, I realized that it would be relatively easy for me to join the group for the last segment.  My only disappointment was that there was not a build day on the last segment of the ride.

I participated in a similar cross country ride in 2011, riding from Seattle to Washington, DC on the Big Ride Across America, a fundraising ride for the American Lung Association.  I have amazing memories from that trip and know that a cross country bike ride of this nature is a very special experience that few people will ever truly understand.  As the riders roll across the country together, they bond in a unique way and truly become a family.  Having experienced this bond first hand, I recognized the distinctive camaraderie immediately upon joining this group.  But I was also thrilled that they graciously welcomed me into the FCBA family.

Our day started in the small town of Twisp.  We were treated to breakfast by our generous hosts from the Covenant Community Church.  They spoiled us with a delectable spread that included eggs, pancakes, cinnamon rolls and fruit.  We knew we would be crossing the Cascades today, so we appreciated the extra fuel.  One of our riders, Brett, celebrated his 27th birthday today, so we sang “Happy Birthday” to him before we headed out on the road.

We headed towards Winthrop, a small town with an Old Western design.  This area, known as the Methow Valley, is a mecca for cross country skiing in the winter.  It is also popular for hiking, mountain biking and other outdoor activities in the summer.  We headed for the Cascades on Highway 20, commonly known as the North Cascades Highway.  It is the northernmost route across the Cascades in Washington State.  Before we began our climb, many of us met a self supported cyclist who was on our route and we were able to learn about his adventure.  He is from Poland and began his trek 115 days ago in New York.  He travelled across the US headed for the Pacific and intends to travel down the coast of the Americas, ending his journey in Chile.

As we began climbing, the terrain gradually changed and the pines and sagebrush that are characteristic of Eastern Washington were replaced with the cedars and Douglas fir that blanket much of Western Washington.  It was an arduous climb up to Washington Pass, which has an elevation of 5,477 feet.  We reached the pass at about the 40 mile mark.  After a brief descent, we were faced with a second (and much shorter) climb up to Rainy Pass.  At that point, we had earned our reward and were treated to a long descent.  Unfortunately, the wind was against us on the way down.  Gravity, however, was on our side. 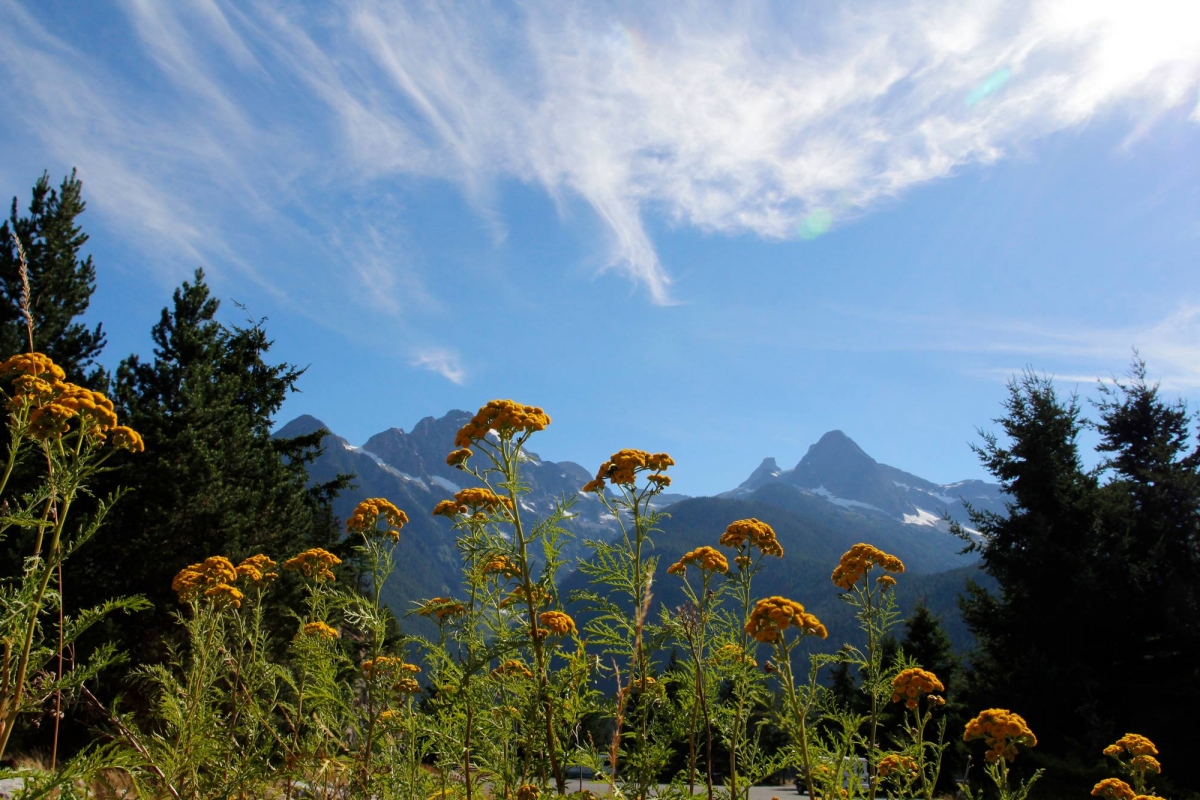 I found the ride down the pass to be an extremely emotional experience.  I was overcome by memories of travelling over the Cascades in the other direction on a cloudy June day in 2011.  On the Big Ride, we headed east over the Cascades on the very first day of our cross country journey.  I realize that I am incredibly fortunate to have had the opportunity to accompany two separate groups of cross country riders in this spectacularly beautiful corner of the world.

One of the most stunning sights on our descent was Diablo Lake, located on the Skagit River at an elevation of about 1,200 feet.  The lake is actually a reservoir created by Diablo Dam, which is part of the Skagit River Hydroelectric Project.  The lake has an intense turquoise hue, which is attributable to the surrounding glaciers which grind rocks into a fine powder which travels into the lake from the surrounding streams.  The powder remains suspended in the water, giving the lake its unique color.

Our ride today ended in Marblemount, with a population of 203.  We are spending the night at the Marblemount Community Center.  Nicole and Ben prepared a delicious jambalaya dinner for the group.  We had ice cream for dessert accompanied by another round of “Happy Birthday” for Brett.

But our day wasn’t yet over.  In fact, the best was yet to come as tonight had been chosen as the night for the world renowned FCBA Talent Show.  We were fortunate to have secured the Marblemount Community Center for the evening as it was large enough and featured a well designed stage.  The show got underway with the debut of a video from our own resident super hero, the multi-talented Mark Major.

The talents displayed throughout the evening were extraordinary.  Mark Major appeared in person allowing us to observe just a few of his extraordinary talents first hand.   We had an intense tire changing competition and an even more intense Oreo competition, where participants were required to stack Oreos on their heads.  (Unfortunately, many of the Oreos quickly became Floor-eos.)  A few musical numbers and a poetry reading rounded out the evening’s entertainment.