My life has been a journey with a varied assortment of rich experiences, and cultural adventures. As I have walked my chosen path, cancer has always been there, like an unwanted companion, forever there, continually spewing its undeniable pain and destruction. Its presence has eaten away at my inner soul, and robbed me of moments of joy and laughter.

The first time I become acquainted with this vile foe, I was a young teenager.  My father, an Oregon farmer, had been a strong, dominant man able to tackle the continuous demands of a farm.   Through my youthful eyes I watched this same man atrophy to a mere skeleton.    Colon cancer ravenously devoured him.   I remember accompanying him to doctor visits and missing the many festivities of my senior year.  He arduously fought to preserve his life, but unfortunately he lost the final battle. Shortly, after my high school graduation my father died painfully in our home.  That solitary event acted as a catalyst for me. My decisions about health and how I treated my body had been forever altered.

Little did I know at the time that this self-commitment would turn into more than a fight to reclaim my health but a commitment to give hope to women who have had mastectomies, and for those who have endured cancer.

Despite the beckoning of my adolescent friends, I gave up partying and started to pay attention to elements of nutrition.  I took vegan cooking classes that promoted a diet high in whole foods with little oil or sugar,  and became devoted to exercises, frequently participating in aerobic classes, walking and riding my bike.  This life-style became a way of life; and became one of my weapons against this menacing malady.

It was the year 1997 that cancer made another appearance.  I was living in Korea, immersed in culture and language, and enjoying the melodies of life.   I was there as a missionary teaching English to South Koreans.    Patty, my oldest sister, was diagnosed with breast cancer.  My mind replayed the nightmarish tapes from childhood, and floods of unwanted emotions surrounded me.

I distinctively remember going to the classroom the next day trying to teach through the tears; tears of anger, tears of regret and tears of sadness.  My Korean students were so compassionate.  They helped me push through the loneliness of being separated from family.  Phone calls from home contained frightening words like lumpectomy, rounds of chemo, lymph node removal and tamoxifen.

Looking back at my prayer journal I found many entries asking God to heal my sister.    His will coincided with my petitions because she has been in remission 16 years.   What a blessing she is to our family!

Several years later cancer intruded the life of my oldest brother, and to this day the fight is in place.  Mike was diagnosed with prostate cancer.   He has been through rounds of radiation, chemotherapy and drugs.   I have watched his body weaken through the course of several years, and my heart is saddened every time I talk to him on the phone.

How could it be? Three members of my immediate family have fought  this dreadful disease.  Statistically, what are the odds of three members being afflicted with cancer?  Two out of six siblings had interfaced with cancer in some form. Certainly, that would be enough, right?

Several years passed by, and it seemed that my unwanted companion had finally left me, or so I thought.  In the year 2010 cancer once again waltzed into my life.    My other sister, Chris was diagnosed with a ductal carcinoma in her right breast.  In order for her to survive this disease aggressive measures needed to occur. She was forced into an almost immediate surgery.  After the operation she was forced to make a decision.   Would she reopen the wound or cut out more tissue or have a mastectomy?

She told a beautiful story of faith in God.  She was sitting in her living room looking out the window with a prayer of guidance on her lips, when two unusual, yellow birds landed on the bird feeder.  At that instance, she knew that God was right there beside her and that the indecisiveness was over.  A double mastectomy with reconstruction was to be her choice.

Tumultuous thoughts of my own possible dance with cancer were rumbling around in my mind.  Would I be next? How could I personally fight this threatening opponent even before the battle began?  I knew that fifty was only a few years away, and statistically I had a 97% chance of getting breast cancer after that magical milestone.      Should I play Russian roulette with breast cancer or do I take measures to reduce the chances of getting it?

The pursuit of wisdom pushed me ahead. I made appointments with a geneticist, an oncologist, and a surgeon.  The consensus of all the doctors was that I was at very high risk for contracting the disease.   My options consisted of doing nothing, mammograms/MRI every 6 months, five years of tamoxifen or a bilateral mastectomy.

Months of indecisiveness, research, and prayer went by. Then more months went by with news of two cousins getting breast cancer.  No yellow birds showed up, but my insurance gave the green light for a bilateral mastectomy as a method of prevention.

My decision was finalized; appointments were made.  The first surgery was scheduled in May of 2012 with two more to follow.  After eight months of doctors’ appointments, restrictions of not lifting anything over the size of a gallon of milk and minimal arm usage, drainage tubes, pain pills and the general feeling of malaise, my plastic surgeon, Dr. Wigod, finally released me for normal activity in January 2013.

My body was in the process of recovering.  I was susceptible to common colds and sinus infections. My biceps slipped to where triceps are located.  During this time, my energy was minimal, and at times if felt I was in a fog.

During my time of mending, a latent desire emerged.  The joys of cycling taunted me.  I remember the delight of having the breeze caressing my face, the ever ending scenes of cows, mountains, flowers and blues skies. Cycling brought out the poet in me, and the athlete, both equally alive, likewise awakened.

I came across the Fuller Center for Housing website, while recovering from surgery in May 2012.  I was so impressed with their mission to help with poverty housing and their cycling adventure fundraiser; I told myself that someday I would like to ride with their organization.

How could I possibly be physically and mental ready to ride with the Fuller Center for Housing Team in the summer? It was only months ago that I experienced the uphill passage of the mastectomy.   Deep in my gut, I knew I had to do something extraordinary to gain my strength and to bring hope to women who have had to walk this difficult journey.

Little by little God showed me the path, but I still bantered with negative thoughts in my mind.  In February I met Charlie, who became my personal trainer.  He listened to my fears of injury and the lies I was telling myself about the handicaps the surgeries left.  He listened but didn’t believe the deceptions.  He helped provide vision, discipline, and hope.

We started out doing a few repetitions of lunges and weights which left me limping around initially.  He increased the intensity slowly each visit.  At some point, I started to truly trust him, and knew he had the best methods to rebuild my body.   He helped me break the chains that bound me to negative thinking and fear. Thanks to Charlie,   my physical capabilities have far surpassed my expectation.

In April, I rode for the very first time with the Ontario Bicycle Club.  What a fantastic club to learn the ropes of riding in a group.  I made myself ride with them once a week after work even though I didn’t feel like it.  I rode in the rain, the wind and the cold.  There were times I thought I would never make it back to my car.  The cold turned into heat.  I started riding twice a week in June.  There were times when my usual riding buddies didn’t show up because of the 100 degree temperatures so I had to ride with the hammer heads; those were guys and gals that only know one speed, and that speed was fast.

I desperately tried to stay close to one of their tires in front of me.  The first rule of riding is never “get dropped” from the group because it is a long, difficult ride by yourself. My legs were seared and I felt like I would puke-up my lungs, but I finished every ride I started. Was it worth it?  Yes, a thousand times yes.

Days of training elapsed, 25 miles, 50 miles, and 70 miles of cycling occurred.   I pumped. I strained. I endured early mornings at the gym. Tenaciously, I went after my dream.  The lies had vanished, and I had prepared myself for ride of my life, and I may I say that I am also in the best shape of my life.

In an amount of hours, I will bounce on my saddle, and begin a ride that earlier I had thought would be impossible. I will ride with the Fuller Center for Housing Team.  Together we will climb mountains, and breathe in the sweet, summer air. We will ride for a cause, giving people hope in dire circumstances that are in need of affordable housing. 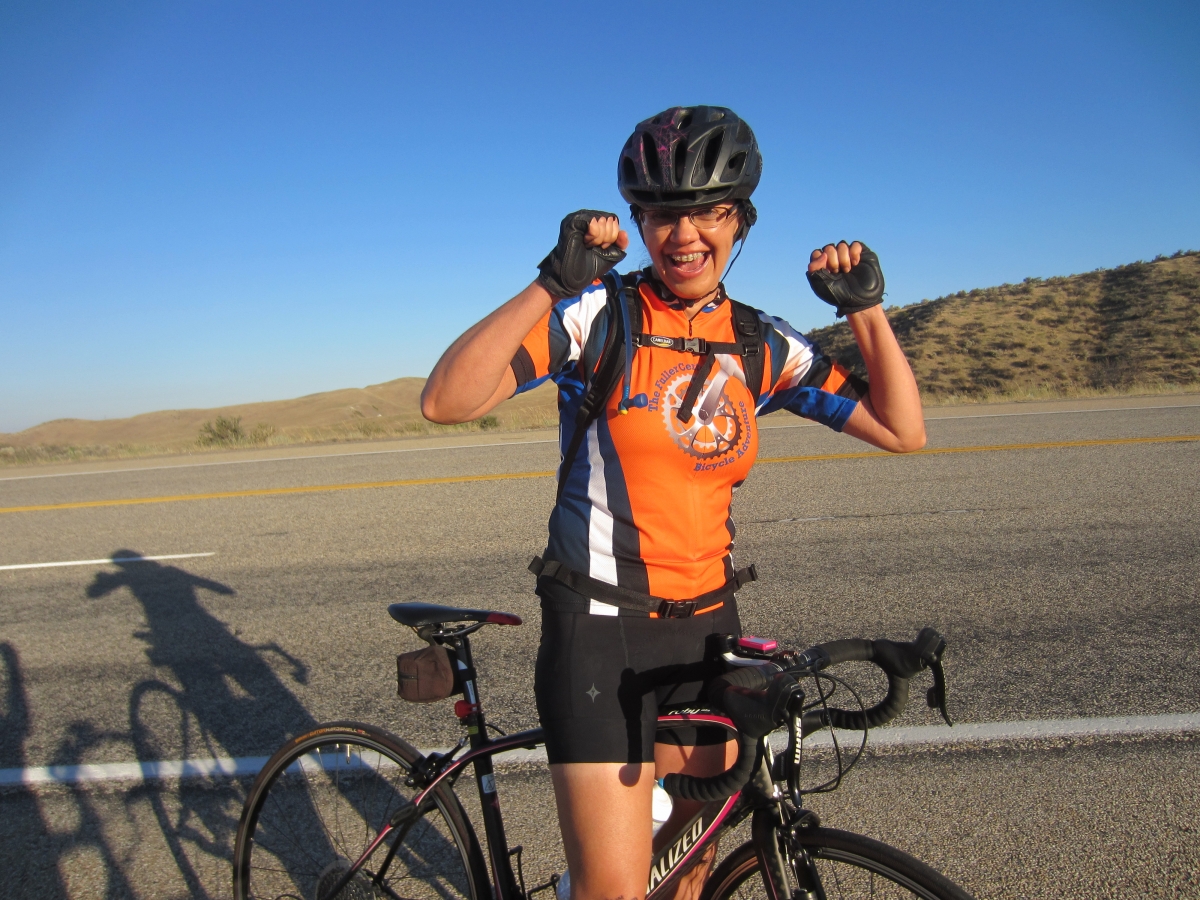 But as for me, I do not ride alone; I ride for all those afflicted with cancer. I pedal for my father, my brother, my sisters, my cousins, for those who have endured mastectomies, and for those who have been touched by any form of this malady. And to you I say;

Pick up your courage.

Be tenacious, and seize the opportunities.

Persevere through the pain.

And know, that I am pedaling for you.