We packed up first thing this morning and got an early start. By 6am we had the trailer packed, our bellies filled with breakfast and we were on the road, sneaking out of the city before sunrise through the northern foothills of Boise. I found myself biking with Dottie, a 5thgrade teacher who is joining us for the next three days of biking as official summer adventure of the year.

Dottie has been training since February for this ride and so she took off like the confident cyclist that she is… and it turned out to be a big, huge day of “firsts” for her. She biked over her very first mountain pass (Horseshoe Bend), ate more snacks than she ever has in a day, AND this was the first time she has ever biked more than 50 miles in a day. Actually she blew that out of the water by biking 106. Yup, it was her first century which just so happened to include several thousand feet of climbing. It certainly wasn’t easy, but she stuck with it and she made it… we both made it! 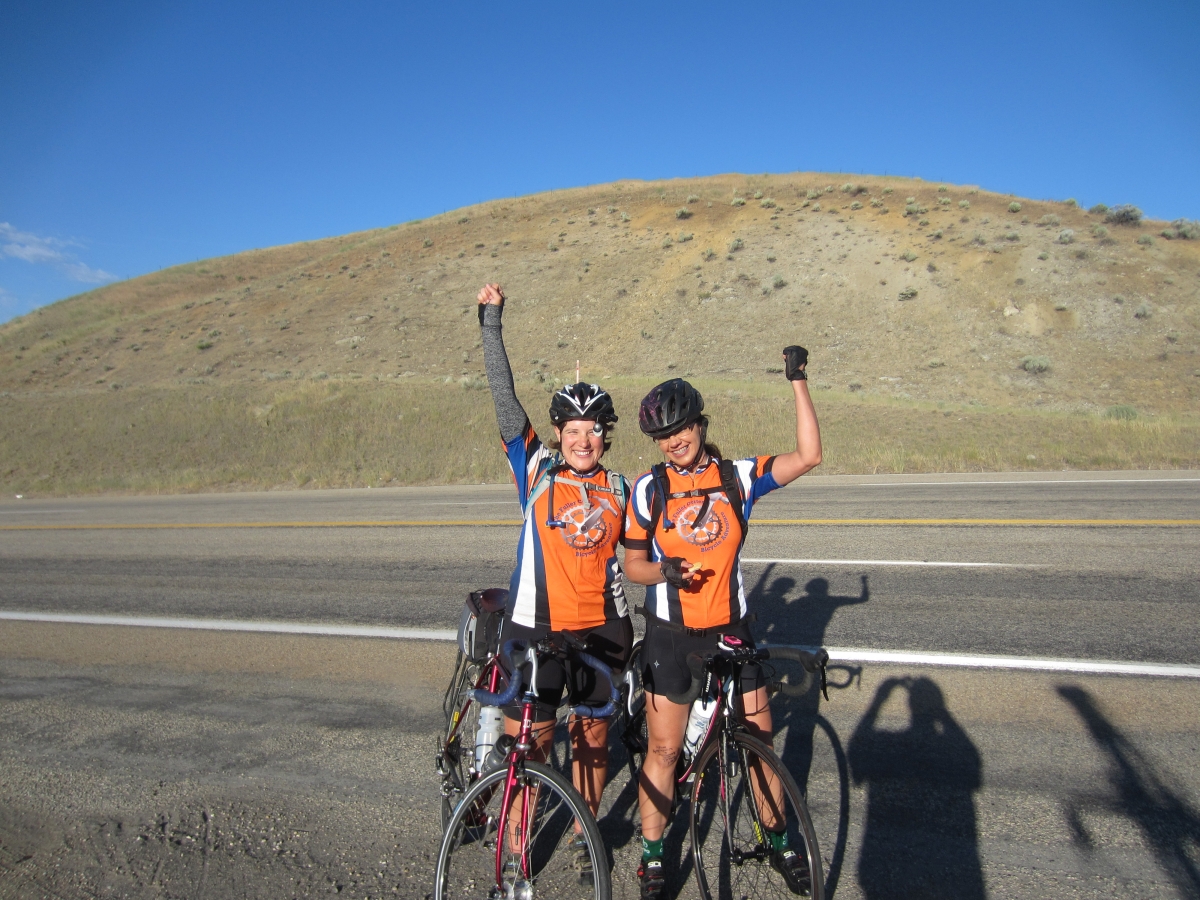 As for me? The pace I set was one that I knew she could hold on to, but one that turned out to be pretty easy for me to maintain, in spite of the long ride and extended climbs. I probably could have gone faster. After over seven weeks (and over 3000 miles) in the saddle, my body is used to this riding business. I could have gone faster, taken shorter breaks and gotten into the church with enough time to shower and work on my blog and maybe, just maybe, had one of those much-coveted naps. But what I gained instead was the privilege to witness Dottie’s success. I got to know our new team member a little better and had someone to laugh with as we hollered at cows along the way and wondered when on earth the next climb would end. I didn’t worry about mountain lions or wolves or any other scary critters. I had another photographer along. It was a great day!

So, what made me decide to take it easy for a day? Well, let’s just say I’ve come a long way with my body. When I was in elementary school I was one of the “big kids” who hated running, couldn’t figure out how to hold a bat (much less hit a ball), and had the coordination of, oh, say a 9-legged, beached octopus. In middle school, after completing a mostly-successful year of 7th’grade volleyball, my mother issued an ultimatum: I could either keep playing volleyball or get several goats to milk and care for. I chose the goats. It was a good choice since 8th grade volleyball gets awfully competitive anyway and involves overhand serves. The goats were wonderful and my parents still have some of the great-great-great grand-goaties of those two rascals I started out with.

Today, on a bike, things are a little different for me. I’m certainly not at the front of the pack of bikers, but I’m not walking my bike either. I happen to fall somewhere in the middle most days which is just fine by me. But, I remember what it was like not to be able to keep up, to be winded at the slightest exertion. I remember my first hikes in Tucson, AZ when I hadn’t exercised regularly in months and I thought I would literally pass out before I was able to get enough air to make it up the hill. But the guys I hiked with were incredibly patient, encouraging, and not condescending at all with me. They talked me through it, cheered me on, and challenged me by inviting me on increasingly difficult hikes.

As I started out with little hikes, and moved on to increasingly difficult ones, I realized that I really could do anything I put my mind to. It was the encouragement of my fellow hikers (and a lot of stubbornness on my part) that led to me hiking hikes I never imagined, like the Grand Canyon Rim-to-Rim-to-Rim hike (over 3 days) that I have done for the past 2 years with friends in Arizona. I was a strong, chunky little kid once… and now I’m still a pretty solidly-built big kid, but something is very different: I’m learning to believe in myself. And when you believe in yourself, you can’t help but try to pass on that joy to other people who are working towards their own goals.

Also, as a side note, during our ride on Tuesday, Dottie was the one who would be doing the encouraging for me as I struggled up and over White Bird Hill. We all take turns. We have good days and bad days. We have fast days and slow days and lots of in-between days. But most of all, we have eachother. At the end of the day that is all that matters, really… that and a good solid night of sleep and a little food besides. 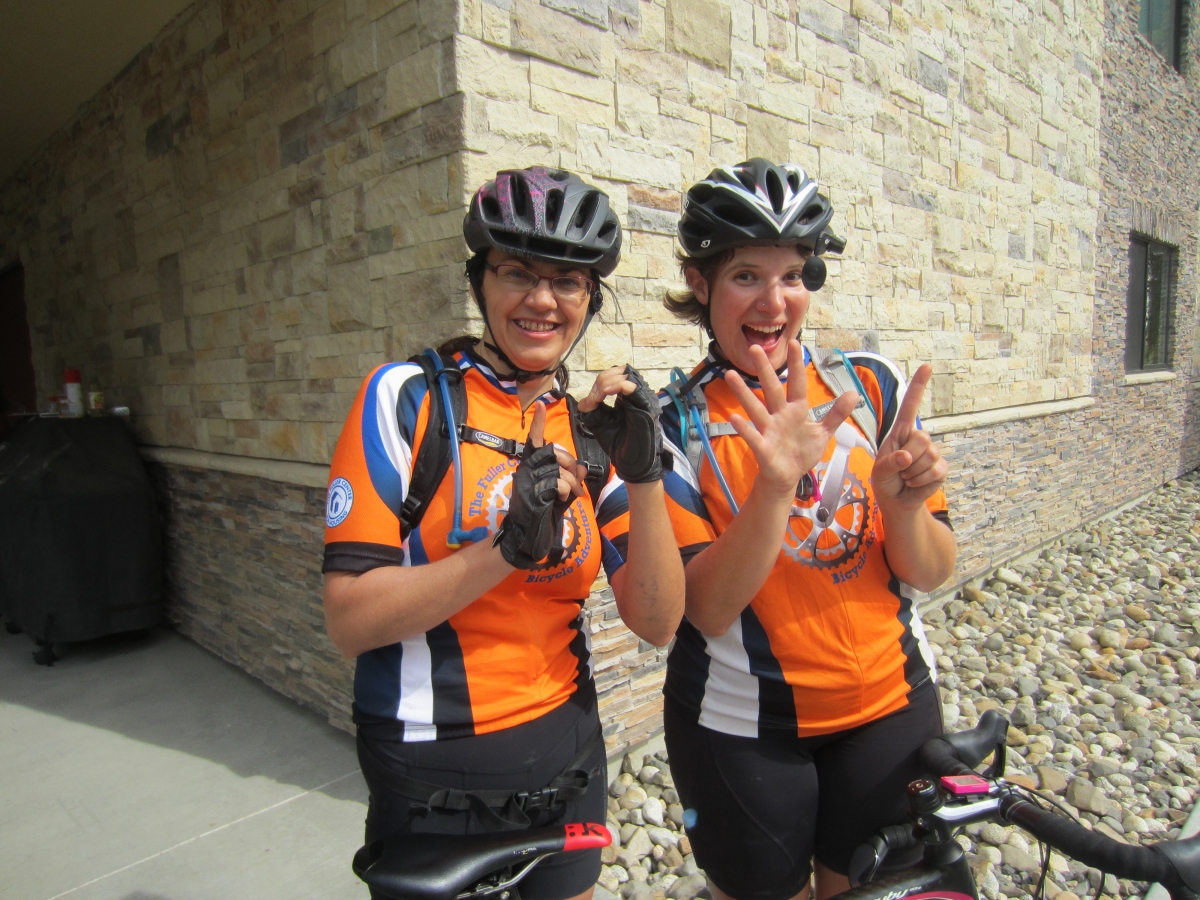 Note: The food tonight, by the way, was amazing: delicious hamburgers, salads, plates of fresh veggies, chips and other fabulous salty things, iced tea and coffee, desserts and snacks of all types provided by the wonderful folks at Our Savior Lutheran Church in the bitty town of McCall, Idaho. They were a pretty small group, but probably also some of the most genuine, kindest, most welcoming and laid-back mountain people you’ll ever meet. I hope I get to go back there again someday. But for now, it is time for sleep and then on to another town and another church tomorrow! Ride on, friends, ride on!