Exactly one year ago today, I was stepping off the airplane in Auckland, New Zealand, about to embark on what later turned out to be one of the most amazing times of my life (so far). This year, I once again find myself many kilometers from home (home being Amsterdam, The Netherlands) but am similarly standing on the precipice of a life changing experience.

First, let me point out the irony of the fact that the only foreigner in this group is writing the blog on the 4th of July in a town called Canadian. Are you laughing yet? Good, because I am.

Moving on. For the uninitiated, I, Midas Nouwens, of semi-sound mind and equally as debatable sound body, am not biking. This means that, instead of working up a sweat each day sitting on a bike seat, I get to plant my derriere in the soft, velvet cushions of the glorious tin beast known as the Fuller Center van. Or, as I like to call her, Bertha. If Bertha had a Facebook account (which I tried to create, trust me), our relationship status would say ‘It’s complicated’. On days like today, when the clouds decide to finally release all the evaporated sweat they collected from our poor bikers over the past few weeks, I love Bertha. She lets me zoom by my rather miserable looking friends while clutching my ever-recording camera and cackle as they sing, dance, and grimace in an attempt to give me some good footage. Other days, however, I wish I could borrow one of the sledgehammers we use during our build days and let Bertha know exactly how much I appreciate every excruciating minute I spend in her hellish innards turning into a puddle of perspiration. Together, we spend hours standing vigil for bikers to arrive, replenish their water bottles, and eat a peanut butter sandwich, but instead of acknowledging my cries of distress, they always take off again within a matter of minutes, leaving me firmly within Bertha’s tight Grip of Death. 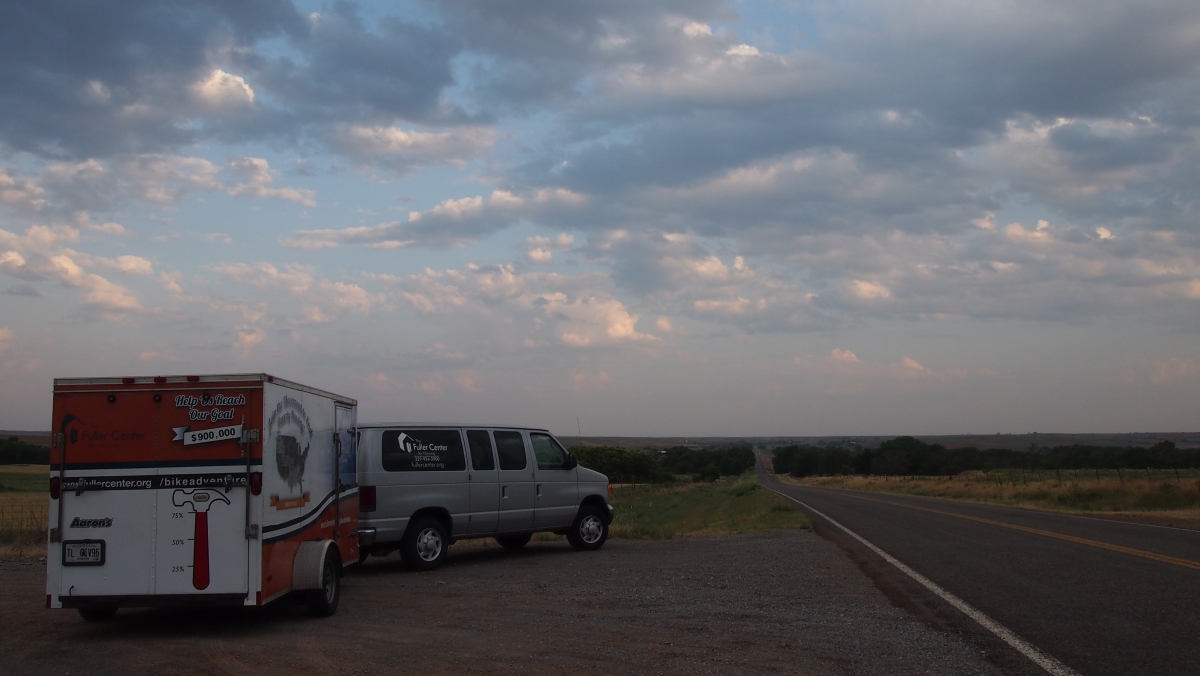 But despite all of this, I only feel gratitude towards Bertha, Melissa (who was foolish enough to hire me), and the Fuller Center. It’s only been three and a half weeks and I’ve already laughed more than I did in the last two months (granted, I was in the middle of my finals, but you get my point). Travelling across the United States like this is absolutely incredible. Not only do I get to see a side of the country that most Americans don’t even get to see, I am doing it while meeting some truly remarkable and amazing people. Being on this trip has opened my eyes to the wonders of diversity and the seemingly bottomless well of human generosity. Already I have made friendships that will last me a life-time, learned more about myself than I could have ever hoped to learn anywhere else, and set a new personal record of ‘times woken up before 5:00 am’.

For those of you who have made it this far (congratulations, by the way, I’m sure it was a struggle reading through my ramblings), if there is one piece of advice I could give you it would be this: celebrate America’s independence today, but most importantly, celebrate your own independence. I grew up with my parents always reminding me about the agency I had over my own life. In the society that we live in, whether it is American or Dutch, there are many things that steal away some of that independence. While there is merit to be had in such stability, it is easy to lose sight of that right of self-determination. ‘You can do whatever you want, as long as it makes you happy’ was a mantra often repeated throughout my upbringing. Having that sense of independence instilled in me by my parents has given me the courage to go out into the world on trips like these and explore all the breathtakingly amazing things our Earth has to offer. And every single time, I realize this is when I am the happiest. Every day is an adventure when you encounter something that is completely out of the ordinary for you (coconut peanut butter, anyone?) and it is this constant sense of wonder that makes me feel most alive. So remind yourself of your own independence. Set off some fireworks in celebration of yourself. Do something because YOU want to do it. Go find your own Bertha.