As you are probably already aware, we have spent our last two days – yesterday and today – off the bike, in Oklahoma City.  Actually, we did ride 10 miles yesterday from Moore to the Courtyard Marriot hotel in downtown Oklahoma City.  We were given several free rooms for last night and tonight, so I’ve been living in luxury rather than sleeping with a sweatshirt for a pillow and a single sheet over a mattress pad on the floor for a bed.  It has been fantastic.

Despite the lovely accommodations, seeing the desolation in Moore after that disastrous tornado struck a little over a month ago has reminded us all of how temporary our possessions, even our homes, may be.  It reminded me personally of the awesome power of Mother Nature and this world.  Today we were sent to a work site where we would collectively do something none of us expected.  Our task was to destroy a home rather than build one – and by ‘home’ I mean the wreckage that a family had called home just over a month ago.  We had to clean up the rubble and move it to the street so that the city could dispose of it.  The bitter irony of today’s work could only be forgotten as we realized the positives that can be taken from a day like today.  We all grew closer as a team, and as we looked around us at the wreckage left by the tornado we saw many other groups of volunteers working on similar projects to help the community of Moore in any way they were able. 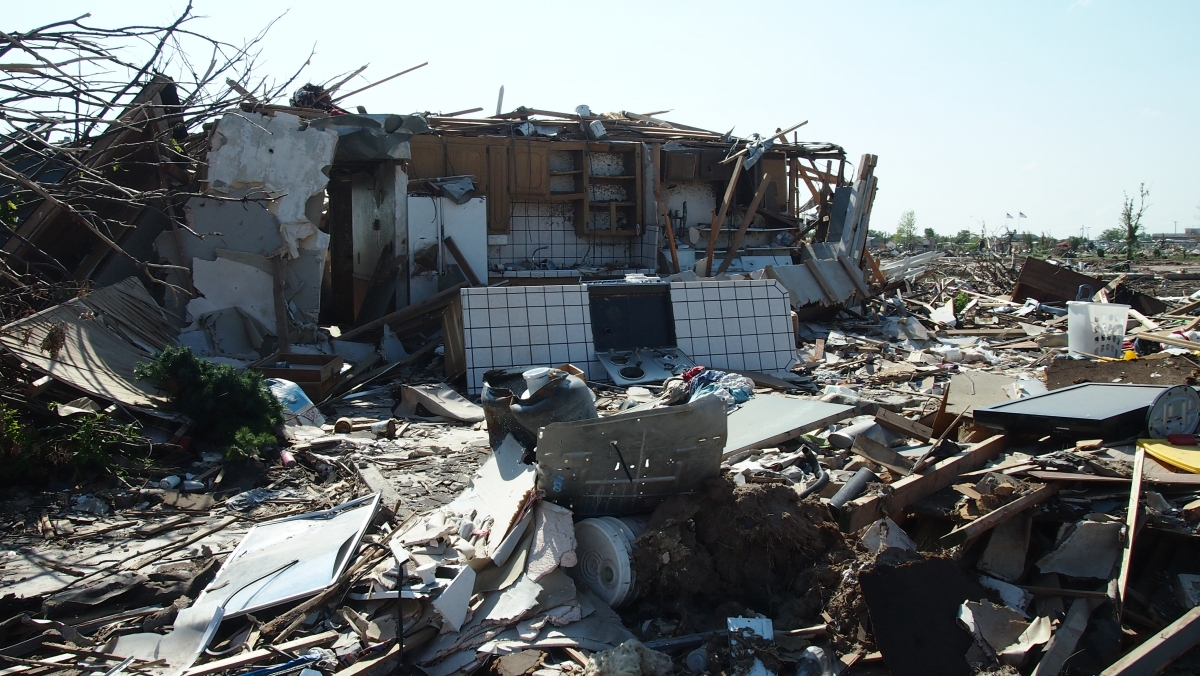 The highlight of my day was undoubtedly when several of my childhood dreams were realized.  I got to swing a sledgehammer right through a wall, as Nate, Steve, Alex and I tore down a small shed that was still standing next to the remains of the house.  That shed may have survived 300 mph winds, but it wouldn’t survive the four of us.  If you ever get to raze a small building with nothing but your own two hands and a really big hammer, I highly suggest you try it.  Just to satisfy the child in me, I even threw one of the sledgehammers through a wall – don’t worry, I made sure no one was close by, or on the other side of that wall.  As it turned out, swinging sledgehammers, shovelling rubble, and carrying bricks can be tiring after 7 hours or so, and we were all excited to return to our nice hotel for showers and rest after the day’s work.

On the way back from the worksite, however, we stopped at the site of the Plaza Towers Elementary School in Moore, where seven children were killed as the tornado tore through the school on May 20th.  Nothing today is left of the school, after demolition teams cleared what the tornado had left standing.  Instead, a chain link fence surrounds the school grounds, covered in t-shirts, mementos, and notes from all over the U.S. and even the world.  Each message was written on a shirt or flag and tied to the fence, and although each had its own origins – like a church in Oklahoma City or a fire station in Chicago – they all shared the same message: one of hope.  There is hope here that the community of Moore will recover from the devastation, and hope that the families of those that are now lost will be comforted in their grief.  In what I expected to be a place of despair and sadness, I left with the sensation of hope.  We really aren’t alone in this world, and even those children that were trapped by the destruction of their school had with them the hopes and prayers of millions of us around the world.  It was a heartbreaking tragedy, but it takes suffering to bring out the best within us.  This is a community that’s suffered, and yet hope prevails.  That’s one lesson I’ve learned on this trip that I won’t easily forget.