So, I managed to hang on for the first 20 miles, but decided to take the rest of today, as well as tomorrow, in the van. Then we have a day off, followed by a build day, giving my rear end three days to heal and get me back on the bike for good.
At the first stop, a guy in a pickup pulled next to the trailer, rolled down his window, and caught my eye, so I walked over and greeted him. He said that we need to be careful out on these roads: “Do you know where you are? In case you don’t know it, you’re in Louisiana redneck country! We’re in the grain transportation season, and these rednecks only drive their trucks once a year. And, mostly using grandpa’s truck that hasn’t seen maintenance for years.” “You guys must be crazy,” was said a number of times. “Ya’ll need to be careful,” was said a number of times! “Do you know anything about redneck behavior?” was said a couple of times. So, I thanked him and off he drove.
On the ride a few days ago a pickup came toward me, with the passenger in shotgun position (appropriate, considering). He had climbed through the window, sitting with his entire body facing across the highway toward me, and when they got close to me, he started “shooting” me with an imaginary machine gun, hollering “da da da da da, got cha!” Glad it was all pretend!
We had a 92 mile day today, with 100°F temperatures. Everybody made the ride except Melissa and me. What a group of troopers! They were sucking up the water and electrolytes and sweating it out faster than they could get it in. An enormous effort from all, and most had never even considered doing something like this. Makes a difference when riding with the enormous purpose of helping people have a safe and affordable place to live.
Our route took us over a river, but the bridge on our route was closed, so we had to route around to find another bridge. In the process, a few of our riders ended up crossing via the Interstate. ChaCha rode it by herself, and said she had never been so scared. But, she did it, and if it should happen again, she will be much more prepared, since she’s now “Interstate biking experienced.”
Funny, supporting the riders from the van feels useful, but not the same as biking. It would seem better had I signed on to drive or support, but I signed on to bike. I don’t really feel as much a part of the team as I would if I were able to bike like I should. Seems like I’m letting the team down; not reality, but what I’m feeling.
Sonic chocolate malt yesterday: 4.5
Temple Baptist Church had a carnival tonight and we were invited to join them for hot dogs, corn dogs, nachos, snow cones, cotton candy, etc. There was a station for each, where you just stepped up to get what you wanted. Haily had done my nails (orange with FCBA and the bikes) again this year, and as I stepped up and held my plate out for a corn dog, the older (older than me even) lady serving caught sight of my nails and asked, “What’s that on your nails?” So I started to tell her what FCBA 2013 means, and she interrupted me, as she kind of gently slapped at my hands, and said, as she looked me in the eyes, “You know, we used to call that behavior sissy!” Then I finished telling her what the letters stand for, showed her the bicycles drawn on the thumbs, and I looked her right in the eyes, and said, “Yeah, and I am man enough to wear them.” She looked right back at me, “Good for you!“ 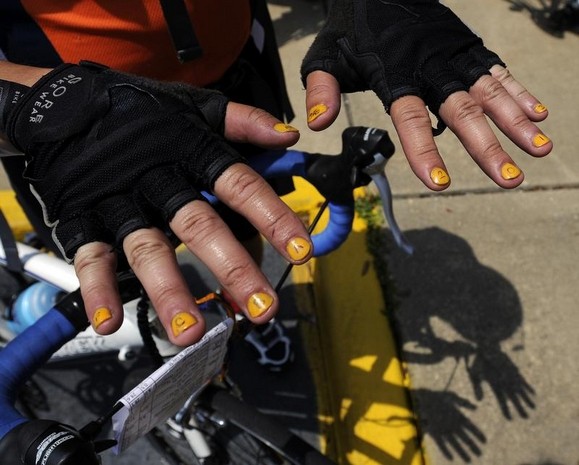 When we finished eating we were back with three of the leaders of the church, explaining how a covenant partnership works. Questions and answers began to wind down, so of course I found the opportunity to share this story with these men, and they asked me who the lady was. I told them it wouldn’t be appropriate to divulge the person’s identity, but two of them, laughing, immediately said that it must be Mabel at the corn dog station. Did not get a donation, but it made my day!
Peace …