Fuller Center for Housing (FCH) Board Chairman LeRoy Troyer announced on Monday that the group’s board had unanimously elected David Snell to be the organization’s president after the untimely death of its founder and first president Millard Fuller on February 3rd. Snell has served as FCH vice president of programs since the house-building nonprofit was started in 2005 by Fuller and his wife Linda, who were also co-founders of Habitat for Humanity. 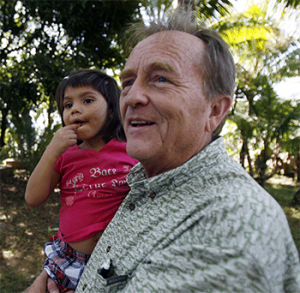 Snell is a veteran of Habitat for Humanity leadership, serving in the field in the United States and in Mexico for almost ten years. He is a former director of Habitat’s Education Ministries and spent seven years as president of Habitat for Humanity Colorado. Among his many projects as an affordable housing consultant was the organization of a nonprofit to build homes on the Pine Ridge Indian Reservation in South Dakota. Since joining The Fuller Center in 2005, Snell has overseen the formation and growth of new Fuller Center projects and partnerships in 25 U.S. states 15 foreign countries. His focus has been on international programs, and he has traveled around the world in this capacity.

Troyer, who is the the president and founder of The Troyer Group architectural and engineering firm, said of Snell, “Our board recognized that with more than 20 years of management experience in affordable housing ministries, David was a natural choice to lead The Fuller Center as we continue building more houses and partnerships. David’s passion and commitment, as well as his leadership and business skills, will be tremendous assets as we carry out the vision of Millard and Linda Fuller to eliminate poverty housing worldwide.”

Snell—who is already at work in FCH’s Americus, Georgia, headquarters—had this to say about the void left by Fuller and the commitment of the staff, volunteers and supporters of The Fuller Center to expand on his legacy:

“Millard Fuller was a giant of a man, and the place he left is not one that can be easily filled. But even larger than the man is the vision he shared, and it rests with those of us he left behind to pull together and, with our collected talents, keep the vision alive. Things will surely be different without Millard at the helm, but the work will go on. A million people around the world live today in decent shelter because of the good work that Millard did. This is an incredible legacy. But a billion more are waiting for a simple, decent place to lay their heads each night, and we are called to their aid. I’m confident that the thousands who were touched by Millard’s life and ministry will rally now to make sure that his vision continues.”