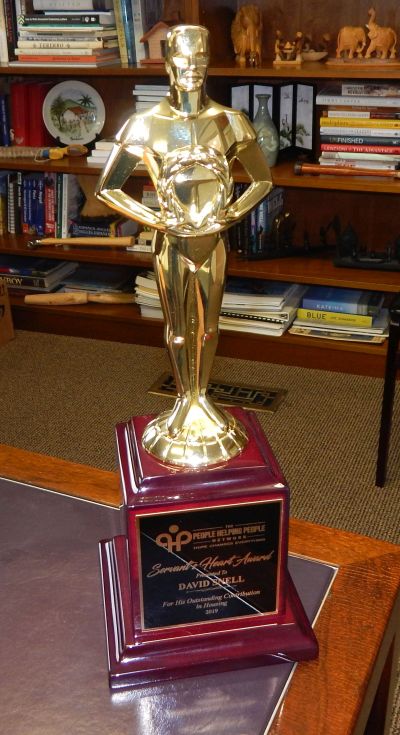 It may look like Fuller Center for Housing President David Snell walked away with an Oscar from Sunday night’s Academy Awards, but he actually now holds an award much more meaningful to him and those who care about helping people have simple, decent places to live through the affordable housing ministry he leads.

“They’re great folks, so it’s a real honor to be recognized by them,” Snell said of People Helping People, one of The Fuller Center’s primary partners in El Salvador where housing communities are thriving. “It’s a great partnership we have with them.”

“David Snell is a great example of servant leadership who leads with a Servant’s Heart,” said Jeff Cardwell, founder and leader of People Helping People. “His passion for serving those in need is contagious to all who have had the opportunity to work alongside of him.

“Millard Fuller, the founder of Habitat for Humanity and the Fuller Center for Housing, would be so very proud of David and all that he has been able to accomplish in providing affordable, decent housing to those in need around the world,” Cardwell added. “It is an honor to present this year’s Servant Heart Award for Housing to David Snell for his dedication to serving those in need of housing.”

People Helping People focuses on a holistic approach to improving lives — specifically by addressing the main issues of housing, hunger, health and education. The Fuller Center provides the housing component of that equation in El Salvador. In fact, the 2018 recipient of the Servant’s Heart Award was Lisse Troconis, who leads The Fuller Center’s work on the ground in El Salvador. She also attended Saturday’s gala.

“People Helping People has a wonderful notion,” Snell said. “They operate on what they call The Hope Equation — which is hunger, health, housing plus education multiplied by faith equals hope. The notion is that you need all of those components to make a full life for a family. So, it’s a great group. And it’s headed by Jeff Cardwell, who has a huge servant’s heart.”

RELATED VIDEO: Lisse Troconis was the 2018 Servant’s Heart Award recipient, and David Snell is among those featured in this video about the honor: