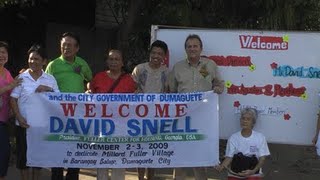 My travels have brought me to Dumaguete City, provincial capital of Negros Oriental in The Philippines. The folks here are celebrating their 20th year of following Millard’s vision, going about the business of eliminating poverty housing from this corner of the world. 840 families now have a decent home as a result of their efforts. Dumaguete City has joined us as the newest Fuller Center for Housing covenant partner, bringing to the number of countries in which we have a presence to 17.

FCH Board member Tom Dineen, who has been a supporter of the work in Dumaguete from the beginning, is joining me on this trip. We arrived in Manila late last night from Tokyo, had a little rest, and left early this morning for the short flight to Dumaguete. We were met at the airport by members of the local board and some homeowners who greeted us in grand style. It was great to see how appreciative the people are of Tom’s continuing support of their work.

We had lunch with Mayor Perdices, who has been a stalwart support of the work here, and then went on tour, visiting all 8 of the communities that have been built, ending at Balugo which we dedicated as the Millard Fuller Village. It was a lovely ceremony with speeches, singing and plenty of ‘Oyees”.

This is a fascinating place. There is a quality of gentility about it. I first noticed it with the traffic, which seems to flow with ease despite there being no stoplights, warning signs or street striping. You never hear a horn honking or angry words. They call it ‘gentle chaos’. Everyone makes eye contact and smiles and the clerks, waiters and bellmen are universally polite. Millard and Linda visited Dumaguete in 1993 and Millard writes in “Theology of the Hammer” that this affiliate represented the very best of Habitat. I think this is due to a social contract they’ve established that encourages kindness and respect.

This promises to be a great project for The Fuller Center. We can be proud to be associated with such an outstanding organization and fine group of home owners.