It’s Wednesday evening as I write this.  We’re back at the inn, had hot showers and feel refreshed and ready.  They had a water problem here yesterday, so we got cold showers and then no water at all.  It’s the little things that make you grateful, things like toilet seats, which apparently haven’t made their mark here yet. 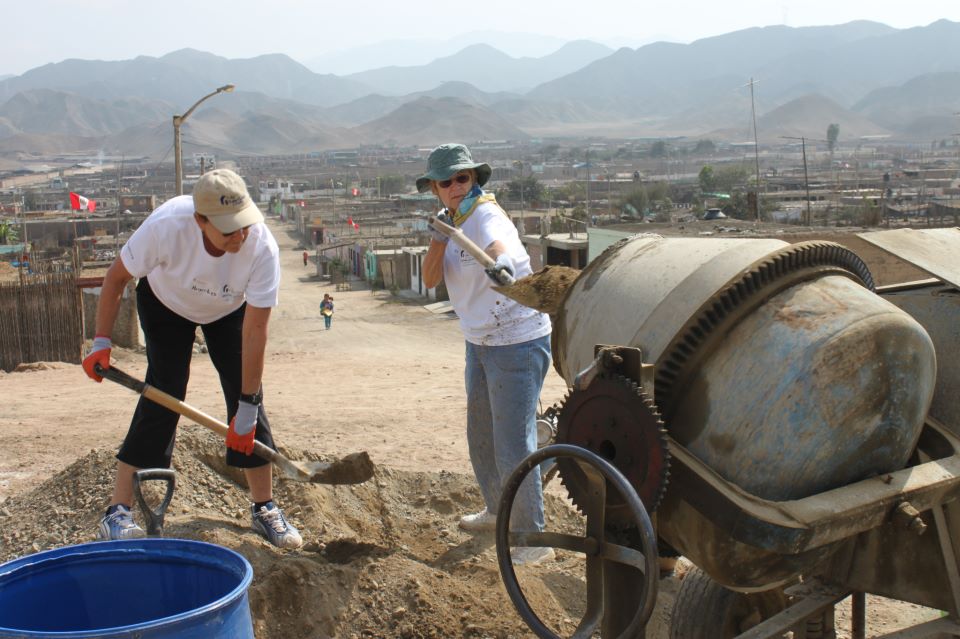 Work is going well on the site.  On Monday we poured floors in half the houses and put roof trusses on the others.  Yesterday we switched, so most all of the houses were ready for roofing and interior work today.  We have a relatively small work force here, so we’re doing things a little differently.  Rather than spending the week on a single house, the volunteers are moving around as needed to keep all of the houses on pace.  It’s working pretty well.  Thursday and Friday we’ll work more closely with a single family so we can establish some bonds, but the volunteers have been pretty generous with this new approach.  One outstanding feature of this build is the level of homeowner involvement.  At least one of the parents has been on site at every house each day.

When we arrived at the work site this morning there was a group with a banner welcoming us to the “Roma” Millard Fuller Legacy Build.  This had us all a’wondering.  Turns out they were from a nearby village called … Roma.  They were there to see if The Fuller Center might not come build some houses with them.  They invited me to visit, and so I did.  What I found was a village of four hundred straw mat huts.  It was striking.  Many of the people there are refugees from the 2007 earthquake who have been forgotten.  Much of the damage in that disaster was to old, poorly reinforced adobe structures, and these are families who lost their homes back then.  So they’ve moved to the edge of town and set up a subdivision of sorts, with wide dirt streets set on a grid and carefully laid out lots measuring about 15 by 90 feet.  It is really quite something — a juxtaposition of poverty and order.   I don’t know what we’ll be able to do  for these folks, or how soon, but visiting with them was a stark reminder of the urgency of our work.

Back in La Florida the work continued.  We framed most of the interior walls and hung drywall and got the roofs on, so we are moving right along.  We still have some work to do before we can tape — seems strange to be hanging drywall outside of the States, but it seems to make sense for these houses.  While we were building houses the power company was running new lines and trees were being planted all around town as part of Zenon Colque’s mission to transform La Florida.  Zenon has been the inspiration behind The Fuller Center in Peru from the very beginning.  Some may remember him from his Habitat days.  He’s doing the same thing with The Fuller Center — building a great organization that has a vision and the will to make it happen.

So all is well on this end of the hemisphere.  We’re having a great time doing a wonderful thing.  What a blessing for us all!