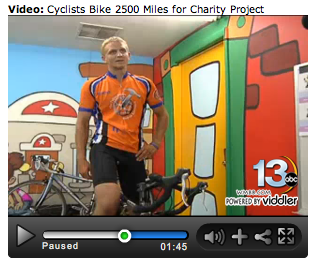 Bay County, Fla:
A trip spanning over 2,000 miles along the east coast is being done on bicycles. The name of the Christian organization is called the Fuller Center for Housing.

They have 60 housing improvement projects across the nation. Several people are joining an interesting tour in attempt to help out.

2,500 miles isn’t your average bicycle ride. However, the Fuller Center for Housing is doing it. This year’s goal is 250,000 dollars to help repair homes for families who need it.

One tour leader and five riders are on the tour this year. This year celebrates the fifth anniversary of the Fuller Center for Housing organization, and the Hurricane Katrina disaster.

The riders made their way through places like Cleveland, Ohio, Washington D.C. and South Carolina.

“We’re doing more than cycling. We’re also working and sweating on different projects and spreading the word about the ministry of the Fuller Center,” Iafigliola said.

The most recent stop was Americus, Ga. The cyclists helped other Fuller Center volunteers fix problems to a duplex unit for two men who are handicap.

The men and women spent a quick night in Panama City beach and had plans to head to the next project in New Orleans the next day.

“We like to say the fuller center as a movement. Movements are messy. You come; you pitch in what you’re able to. It’s just the way our organization works. Maybe you can give a day; maybe you can give 10 dollars. Whatever you can give, we can use,” Iafigliola said.

It is all a part of the organization’s “five loaves and two fish” church challenge. They are encouraging at least 500 churches in the panhandle and across the nation to help two families in need of home renovations.

The leaders on the tour were scheduled to make a presentation about the idea at Grace Episcopal Church in Panama City Beach Friday.

So far, the bike tour has raised 119 thousand dollars from donations. Read more>>