Gomes’ Pipe World Tour has taken him to places such as the Australian Outback, Vietnamese jungles and Moroccan deserts. Last year, he spent 10 days embedded with the primitive Aiha Kalapalo tribe deep in the heart of the Amazon. And, now, he is in Haiti working with The Fuller Center for Housing’s Mike Bonderer, helping build a house for a family in the eastern Port-au-Prince suburb of Croix-des-Bouquets. As if that’s not enough cultures meshing at once, the house they worked on in Haiti was funded by a $3,000 tithe from Fuller Center Armenia. 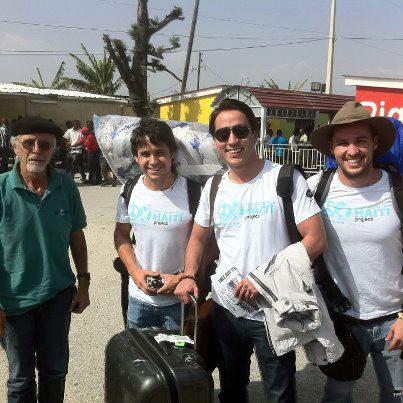 “They own a company that designs sportswear, and they go to different parts of the world and try to absorb the culture as it relates to what they do,” said Bonderer, who also leads The Fuller Center’s work in El Salvador through the Homes from the Heart organization he runs with his wife, Zuze. “What they’re trying to do is go back to Brazil and produce a line of clothing that reflects Haiti, as they have with different cultures.”

“The beginning of this idea is from when we were starting the brand,” said the 27-year-old Gomes, who dropped out of college to start Pipe Content House when he was just 21. “We were thinking to put something more in clothes for the customer who doesn’t buy clothes with no message, no nothing. So we started these expeditions to put some culture and to put some good messages on the clothes for those who want something with some positive message. Not just clothes, but an expression.”

But a deeper look at Gomes, who traveled to Haiti with co-worker Rafael Matheus and good friend Fernando Mariotto, reveals a man who hardly suffers from a lack of creativity. In his travels, he does soak up inspiration and passion from different cultures, but he delivers even more to the people than the voluminous inspiration he takes away from his expeditions.

“They’re working right now,” Bonderer said Monday via Skype. “They’re very much social activists. They’re very much concerned about poverty. It’s not all work, and it’s not all play. … These kids are just real sharp. One of them is a doctor (Mariotto), one (Gomes) is a designer, and the other guy (Matheus) is a nuts-and-bolts, run-the-company kind of guy. So Bruno does the creativity, this other guy does the business side, and the doctor’s been friends of theirs for years and kind of has his own mission. He’s a dermatologist who’d like to help kids who’ve suffered from burns and things like that. It’s just a sharp group of kids.”

Gomes insists that the Haitians provide him more than he can give them, but he says that is a familiar theme in poverty-stricken areas he has visited.

“The people here are very well and very good,” he said. “They give you a free smile every time. It’s good to help someone. I’ve gone to other places like U.S. and Europe and some places in Brazil and they have almost every material thing, but they forgot to smile a lot and have an easy-going life. When you go to places like Haiti or some Indian places that are poor places, there is an exchange. No material things — more feelings and happiness and music. This is the kind of thing that brings me here to Haiti.”

Fuller Center Global Builders coordinator Hailey Dady has heard similar comments from others who have worked with The Fuller Center’s operations both east and west of Port-au-Prince.

“Visiting Haiti is a powerful experience because you are able to see families who’ve been living in tents since the 2010 earthquake finally have a simple, decent and affordable place to call home,” she said. “The excitement in the families’ faces just radiates from ear to ear. It’s just so contagious that you can’t help but get excited.”

Gomes has built a home before, but he agreed that partnering and working side-by-side with a family in the way The Fuller Center does puts the experience in a different light.

“I have helped build a house once but not like here,” Gomes said. “It’s an amazing experience because we met the family before we started building. They live five to a tent, and after we give them the house, it’s going to be a very good experience for them because their lives are going to change.”

BONDERER: ‘WE JUST WANT TO ROCK AND ROLL’

One of the reasons The Fuller Center for Housing is growing is because of the simplicity of its mission, its lack of bureaucracy and its desire to simply build decent houses. A Marine Corps veteran, Bonderer represents that spirit as well as anyone in The Fuller Center ranks, albeit more bluntly and more colorfully than most. He is the driving force behind the thriving San Luis Talpa community in El Salvador, and he also is spearheading efforts to house Haitians in Croix-des-Bouquets in efficient and cost-effective ways.

“We are building a very inexpensive house that falls around the $3,500 range,” he said. “Usually, it’s about 16-by-16 depending on the lot size that the people own. It’s just a basic house. It’s kind of what we were talking about when we first had the earthquake in Haiti. The recipients of these homes really like them, but they’re not fancy. But they’re shelter and a secure house for people to live in. That’s what we originally promised, and that’s what we are doing.

“The people that we’re building houses for live in tents,” he added. “Or they live in mud structures — wood, sticks and mud. And when it rains, these houses disintegrate and have to be patched and rebuilt. They’ve been building like that for hundreds of years here in Haiti. So we’re building with block and steel a much stronger structure. We’re just trying to replace housing that either got knocked down or never existed. But the good thing is people are getting out of tents and into houses.”

In true Bonderer fashion, before he began building in Haiti, he went straight to officials in Croix-des-Bouquets to lay down the law and rip up any red tape.

“What we did was we went and established a relationship with the mayor of Croix-des-Bouquets, so we kind of eliminated all the political hassles,” he said. “He selected the recipients. And that’s what we’re responding to. We had a list of 20 people, and we’re trying to serve those 20 people. And, after that, then we’ll try to get a list from that mayor and another mayor. We don’t want to get into the ownership issues. We don’t want to be hiring attorneys. We just want to rock and roll.”

“One of the best things about the trip to Haiti is to meet Mike Bonderer,” Gomes said with a laugh, jokingly adding that he had learned some colorful new English words from Bonderer, who left Kansas City for Central America in 2001. “I’d like to go to El Salvador to build with him again. He’s a great guy, wonderful guy.”

Speaking of rock ‘n’ roll, Gomes, Mariotto and Matheus had the chance to meet another colorful character in Haiti over the weekend as their work trip began at the same time as the three-day Carnival of Flowers celebration. 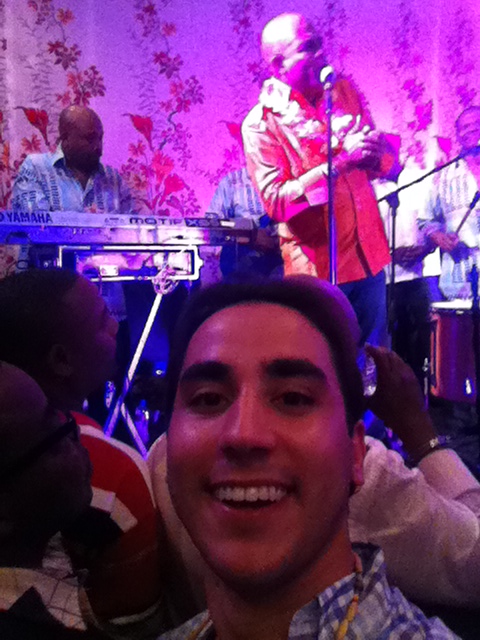 My Brazilian friends got to party with the president (Michel Martelly) and met him, so they had a ball,” Bonderer said. “He’s an interesting character. They call him ‘Sweet Micky.’”

Martelly was a professional singer and keyboardist before becoming president, albeit in the Haitian compas music scene instead of rock ‘n’ roll. He released 14 studio albums and many live recordings before ascending to the presidency in May of 2011.

Dady said getting to mingle with the musical president would be a nice item to add to every Global Builders itinerary in Haiti but that the Bonderer’s success in getting simple houses built and the growing community of duplexes being built west of Port-au-Prince in the Lambi community is why teams are lining up to work with The Fuller Center in Haiti.

“The excitement is definitely building as more and more people work with us there and then spread the word about the progress in Haiti,” she said. “It’s become one of our most popular Global Builders destinations. We’ve got 12 teams going in the next six months, and that number very well could grow.”

She added that while the Brazilian trio is the first Global Builders team to initiate a trip from outside North America, it should open doors to similar trips.

“It’s great to have our first team from Brazil,” she said. “It just adds to the excitement that keeps building there, and we hope this will help open the door to receiving other teams from around the world. It’s especially special that this house was also funded internationally, from Armenia. Soon our very first Global Builders team going into Nepal will actually be coming from Singapore. We just want to get houses built, and a worldwide effort will only help.”

As for Bonderer, he could not care less where his volunteers and financial supporters originate. Asked what he needs to continue growing his work in Haiti and El Salvador, he answered in his usual blunt style.

“Send money or just show up!”

To "Send money!", click here to donate to The Fuller Center for Housing.

To "Just show up!" click here to see upcoming Global Builders trips or learn how to start one.