Social media sites were full of 9/11 images and the oft-quoted “never forget” statements on Tuesday. And, indeed, hardly anyone will ever forget that tragic day. But for New Jersey couple Fran and Chuck Bubeck, September 11 has long been a date they will never forget. 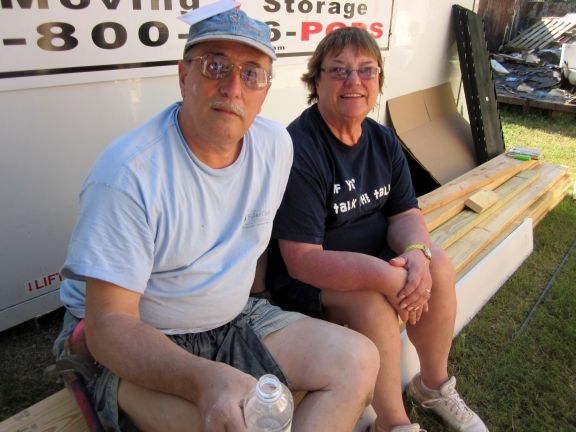 Fran and Chuck are spending their anniversary working together at The Fuller Center for Housing’s Millard Fuller Legacy Build in McDonough, Ga. Both are heavily involved with the Fuller Center in the New Jersey Pines covenant partner in Tabernacle, N.J., where Chuck is the vice-president.

Friends jokingly described the Bubecks as “disgustingly in love,” which elicited laughs from the couple, who verified the description as accurate.

“We’ve been able to put up with each other for 47 years, so I think that shows that we are,” Chuck said.

Like people who were born on September 11, their anniversary date will remind people forever more of that horrific day in 2001.

In 2001, the Bubecks were apart on their anniversary as Chuck was working overseas in London while Fran, a registered nurse, was working at a doctor’s office in New Jersey. It was a two-week ordeal for Chuck to finally get home to his wife.

“At one o’clock in the afternoon, I got yellow roses from Chuck at the office for our anniversary, as he always does” Fran said. “It’s my favorite flower. I looked at the flowers and thought he was so sweet, but the whole morning was such a disaster that it took the bloom off the rose.”

The Bubecks could be off celebrating their anniversary in some quiet retreat, far away from the noise of pounding hammers and screeching saws. But they believe volunteering as they do with The Fuller Center is as good for their marriage as any romantic getaway.

“This is a lot more binding,” Chuck said. “We’re both exhausted at the end of the day, but it’s a good exhaustion. You’ve done something worthwhile.”

Click here to honor the Bubecks’ anniversary with a donation to The Fuller Center in their honor.