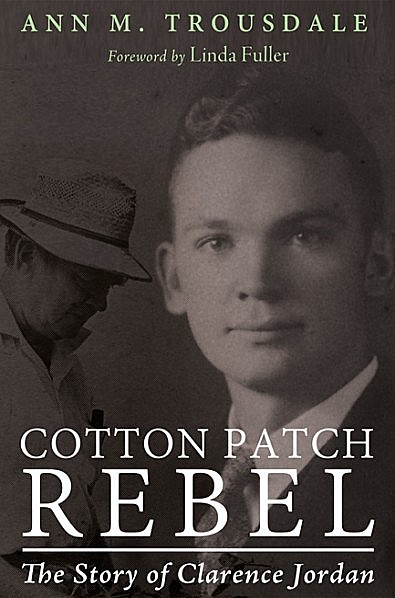 Millard and Linda Fuller co-founded The Fuller Center for Housing in 2005 as a return to the grass-roots, Christian principles upon which they had launched the affordable housing movement decades earlier.

Perhaps the most important principle for The Fuller Center is partnership, and that springs from the teachings of Christian theologian Clarence Jordan, who founded Koinonia Farm, an intentional Christian community in Sumter County, Georgia, in 1942.

After the Fullers gave up their wealthy lifestyle and their entire fortune in the 1960s to dedicate their lives to God and to serving their fellow man, they visited friends at Koinonia and found themselves captivated and inspired by Jordan’s simple Christian teachings. Of meeting Jordan, Millard often said, “When the student is ready, the teacher appears.”

Now, that teacher’s lessons are available for the next generation, thanks to author Ann Trousdale.

In writing the forward to the book, Linda Fuller recalls: “Day in and day out we saw Clarence living the life of a disciple and inspiring thousands of others to do likewise. … He believed the essence of Christianity was incarnation; a spoken word without it being acted upon was absolutely meaningless.”

Fuller Center President David Snell is one of those whose endorsement adorns the back cover of the work: “Trousdale tells that story to a new audience, to young people who are growing up in a difficult age and who need to know that living as Jesus taught is the surest path to a joyful life,” Snell writes.

The Resource Publications book can be ordered for $12 — in paperback or e-book format — from Wipf and Stock Publishers by clicking here.

In the video below, David Snell talks about the importance of “Cotton Patch Rebel” and Ann Trousdale discusses the legacy of Clarence Jordan: