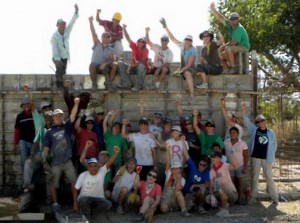 The Fuller Center for Housing of El Salvador‘s most recent Global Builders team traded the snow drifts of Old Lyme, Conn. for the tropical sun of San Luis Talpa.

The team from Old Lyme’s First Congregational Church consisted of 15 high school students and 15 parents and other adults. The unusual dynamic made the week a bit more adventure-filled than normal trips. But a great deal of work was accomplished in only four days–and at the end they threw a party to celebrate.

The team poured two floors, the walls for one house, prepared the foundation for a new duplex, and dug two holes for septic tanks.

Many visitors to El Salvador want to try all the local food they can–though it doesn’t always sit well as some of the team members learned. Much of her team may disagree, but Molly Case, a 17-year-old volunteer from Old Lyme High School, admitted she "might actually miss pupusas," one of El Salvador’s few local food staples. 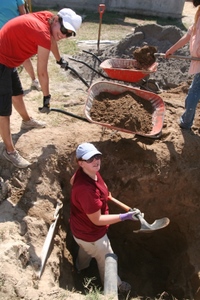 In addition to possible food-related issues, the team decided the drastic climate change could have an averse effect. They elected "safety officers" to monitor teammates’ health conditions and water intake.

"It was great to see everyone working together and looking after each other," Micah Whitt said. Whitt volunteers for FCH El Salvador coordinating volunteer teams as well as building, organizing and communicating for the covenant partner as needed.

After they returned home, he said positive feedback from team members continued.

"There are some things that make you realize how great life is, and how little you need to be happy, and what people truly care about you…I miss El Salvador," Carson Shook, a senior from East Lyme High School, said.

Lizz Zanin, a freelance television producer from Los Angelas who joined the Connecticut team, is already telling her friends that she "totally recommends this kind of ‘vacation.’"

"Give it a try sometime!" she said. "Your body will be tired when you come home, but your soul will be totally recharged!"

According to Whitt, the team had plenty of soul-charging moments as they worked alongside future homeowners and heard their stories. They interacted with the children of current homeowners by distributing toys, coloring books, and temporary tattoos. It didn’t take long for the local children to start following their favorite volunteers around all day from the moment they exited the van in the morning, on the worksite, until they chased the vans away in the afternoon. 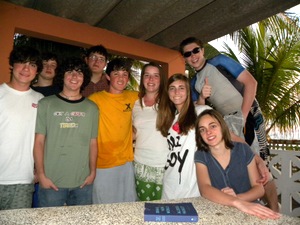 "The team worked incredibly hard despite obstacles. It was a learning experience for everyone and is already starting to have lifelong impacts for many," Whitt said.

And the celebration they threw at the end was proof. It took place at the volunteer beach house for all the workers and people who helped throughout the week.

Sign up your youth group by proposing a trip to El Salvador here!

Or visit the Global Builders "Upcoming Trips" to see trips you can join.