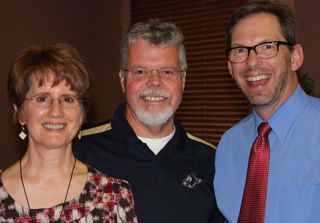 My friend and colleague Kirk Lyman-Barner dropped by my office yesterday to fill me in on the status of next week’s trip to the Democratic Republic of the Congo that he’ll be making with Fuller Center President David Snell, director of international field operations Ryan Iafigliola, friends and representatives of the United Church of Christ’s Southeast Conference.

I appreciated his making the long 22-foot trek to my office, though I guess it pales in comparison to his upcoming trek to the jungle in the heart of Africa, which requires about two days of flying, navigating crazy airports, riding in taxis and other land vehicles and finally a five-hour boat ride up the Ikalemeba River just to get to Balomba, where they will start doing some real work. As if all that travel isn’t work enough.

Not only is the group closing in on its goal of purchasing a portable sawmill to help the village become more self-sufficient in its building (click here to donate toward that goal), but Kirk says support big and small is coming from all sorts of areas. For instance:

"Even in the worst of economic times, God never goes bankrupt," Kirk said. "As Millard used to say, ‘God has given us enough resources to ensure that all of his people live in decent housing.’ It is up to us, you and me, to make it so."

For more about the trip to the Democratic Republic of the Congo that begins Sunday, click here.