Just as Rodney and Carmen Lott tried to explain on Friday afternoon how the nearly complete new home just a few steps away from them would change their lives, they were interrupted. A florist was there to deliver a housewarming plant — a gift from their new next-door neighbor, Rachael. 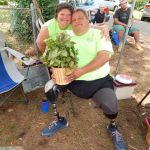 They were getting used to such interruptions. Since volunteers began raising the walls on their new home just a few days earlier on June 18, 2018, the project was hit with a slew of positive surprises and unexpected blessings on a daily basis — in addition to all of the hard work and blessings that paved the way for the project in the first place.

The entire build was a conglomeration of everything that makes the Chattahoochee Fuller Center Project one of the most thriving in the United States. Another neighbor rode down the street to the work site along with his poodle on a zero-turn mower each morning to deliver waters for the dozens of volunteers, most of whom came from the Chattahoochee Valley, but a team of 10 came from Pennsylvania — including house leaders Barry and Amy Stuck. Several area churches supported the build and sent youth volunteers. Other volunteers included men from New Birth Ministries’ transitional program. Nearby West Point Mayor Steve Tramell also was a house leader. And Chambers County Sheriff Sid Lockhart grilled burgers for all of the volunteers on Friday’s dedication day. Dozens more, too many to list, also worked on the home.

In-kind gifts such as OSB from Norbord, shingles from World Vision, insulation (and employee volunteers) from Knauf, HVAC from 4 Seasons Heating and Air, countertops from A&X Granite & Marble, paint from Behr and enough Hardie Board for this home — plus two more planned for September — means the house will be even more affordable as the Lotts repay the costs of building the home with a zero-percent interest mortgage that will go toward helping others in the community get the same hand-up. The Lotts cannot wait to make their first payment.

“We realize how special this is — how much love this is,” Carmen said. “Everybody’s here. It’s been amazing. We didn’t quite realize what The Fuller Center did until we got involved. Now we’re excited about the next house and that we get to help.”

“It’s a fresh start,” added Rodney, who said they had been renters for the past ten years.”It’s a place to call our own, and it’ll be paid for in 20 years. I can’t even describe how humbling it is. We love The Fuller Center and encourage everyone to get involved.”

Chattahoochee Fuller Center President Curt Johnson said the teamwork and community involvement seen this week is no coincidence but the result of years of cultivating relationships and producing results. He added that this project’s homeowner partners have many friends throughout the community, only increasing the volunteer interest and financial support.

“We had so many people come together, so many businesses and so many industries, and a lot of our individual donors came forward when they found out who the homeowners were,” Johnson said.

“We so blessed to live in the community of Valley-West Point-Lanett,” CFCP Executive Director Kim Roberts said. “We’re called The Greater Valley for a reason. There’s a lot of great people here, a lot of great businesses. … It’s just been amazing to see, even with the heat, what can be done when a little bit of love is spread.”

Indeed, the heat was oppressive all week long, yet the volunteers and leaders fought through it and have the home nearly ready for the Lotts to move in — something they will do in July. Even though he and his Pennsylvania crew are more used to milder summer temperatures, house captain Barry Stuck had no complaints.

“Yeah, you’re tired and you’re sweaty, but it’s a sense of accomplishment that you’re really helping somebody, and the homeowners really appreciate it,” Stuck said. “It’s just the satisfaction of being able to work with a homeowner and just to help them maybe start a better life. They have a need, and we have a gift to be able to work with our hands. It’s just nice to be able to come and help them get a fresh start.”

“Oh, it has been sooo hot,” said Roberts, a lifelong Southerner. “We have been spoiled by the air-conditioner. But you know what — when you see people continue to work in this kind of weather, they love what they do.”

Like the CFCP’s Roberts, Rodney Lott is a double-amputee. The amputations were necessary to stop the spread of a bone disease.

“We’re soul buddies because we’re amputees,” he said of his relationship with Roberts, whom he first met at the CFCP’s ReUse Store in Lanett, Alabama, where items from furniture to tools to clothes can be found at huge discounts with profits benefiting the CFCP’s work. “I’ve known Kim for several years. Everything in our house came from the ReUse Store, just about.”

Also like Roberts, he deals with his condition with a sense of humor and a never-ending drive to serve others and share the love he has for everyone he meets.

“‘I fought a bone disease for years, and they were taking off a little at a time,” he recalls “We prayed about it and were sad for a minute, but it’s been a blessing. It’s allowed me to talk with people who are going to lose their leg or have lost a leg and don’t want to wear the prosthetics. God opened a door for me to talk with them.”

Each day of the blitz build — as with almost every Fuller Center build across the nation and around the world — began with a devotion. Friday was Rodney’s turn to deliver the devotion. He focused on one word: wanted.

“God doesn’t need us — He wants us,” Rodney said. “God didn’t need anybody here — He wanted these people here to show up to work. What a powerful word. We’ve seen all these people come out because they wanted to, because they love God. … It’s awesome just to be a child of God and just to know that there are people who love you.”

RELATED LINK: Valley Times-News editorial — “Millard Fuller would be proud of the CFCP”